Perak, also known by its honorific Darul Ridzuan or "Abode of Grace", is one of the thirteen states of Malaysia, and the fourth-largest one. It borders Kedah at the north; Thailand's Yala and Narathiwat provinces to the northeast; Penang to the northwest; Kelantan and Pahang to the east; Selangor to the south, and the Straits of Malacca to the west.

The state's administrative capital of Ipoh was known historically for tin-mining activities until the price of the metal dropped, severely affecting the state's economy. The royal capital, however, remains at Kuala Kangsar, where the palace of the Sultan of Perak is located.

The state's official name is Perak Darul Ridzuan. Perak means silver in Malay, which is probably derived from the silvery colour of tin. In the 1890s, Perak, with the richest alluvial deposits of tin in the world was one of the jewels in the crown of the British Empire. However, some say the name comes from the "glimmer of fish in the water" that sparkled like silver. Darul Ridzuan is the state's Arabic honorific, and can mean either "land" or "abode" of grace. 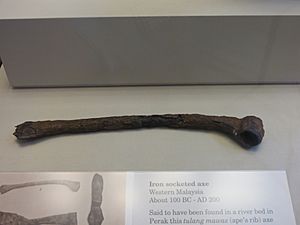 Legend tells of a Hindu-Malay Kingdom called Gangga Negara in the northwest of Perak. Archaeological discoveries indicate that Perak was inhabited since prehistoric times.

The modern history of Perak began with the fall of the Malacca Sultanate. Raja Muzaffar Shah, the eldest son of the last Sultan of Melaka, Sultan Mahmud Shah and his Queen Tun Fatimah, fled the Portuguese conquest of 1511 and established his own dynasty on the banks of the Sungai Perak (Perak River) in 1528 (his younger brother, meanwhile, followed their mother Queen Tun Fatimah to the south to establish the Sultanate of Johor in the same year). Being rich in tin ore deposits, the dominion was under almost continuous threat from outsiders. 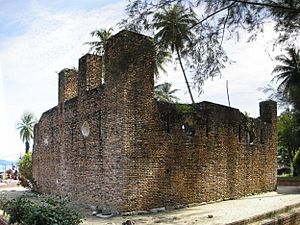 The ruins of the Dutch Fort on Pangkor Island

The Dutch attempted to control the tin trade in the 17th century, and built defensive forts at the mouth of the Perak River and on Pulau Pangkor.

Early history recorded the arrival in Perak of the Dutch in 1641, when they captured the Straits of Malacca and controlled tin-ore and spice trading. However, the Dutch attempt to monopolise the tin-ore trading in Perak by influencing Sultan Muzaffar Syah failed. They then turned to Sultanah Tajul Alam Safiatuddin, the Sultan of Aceh, to seek permission to trade in Perak, which forced the Sultan of Perak to sign a treaty, allowing the Dutch to build their plant in Kuala Perak on 15 August 1650. This did not go down well with the aristocracy of Perak.

In 1651, Temenggung and the people of Perak attacked and destroyed the Dutch plant. The Dutch were forced to leave their base in Perak. The Dutch sent a representative to Perak in 1655 to renew the earlier agreement and to seek compensation for the loss of their plant. The Perak government however did not honour the treaty and was thus surrounded by the Dutch; in retaliation, the people of Perak, Aceh, and Ujung Salang, launched a surprise attack on the Dutch.

In 1670, the Dutch returned to Perak to build Kota Kayu, now known as Kota Belanda ("Dutch Fortress"), on Pangkor Island. Perak agreed to the construction because of news that the Kingdom of Siam would be attacking the state. Nevertheless, in 1685, Perak once again attacked the Dutch on Pangkor Island, forcing them to retreat and close their headquarters. The Dutch attempted to negotiate for a new treaty, but failed.

In the 19th century, the Bugis, Acehnese, and the Siamese all attempted to invade Perak, and only British intervention in 1820 prevented Siam from annexing Perak. Although the British were initially reluctant to establish a colonial presence in Malaya, increasing investment in the tin mines brought a great influx of Chinese immigrants, including Foo Ming, who formed rival clan groups allied with Malay chiefs and local gangsters which all fought for control of the mines. The Perak Sultanate was unable to maintain order as it was embroiled in a protracted succession crisis.

In her book The Golden Chersonese and The Way Thither (published 1892 G. P. Putnam's Sons), Victorian traveller and adventurer Isabella Lucy Bird (1831–1904) describes how Raja Muda Abdullah (as he then was) turned to his friend in Singapore, Tan Kim Ching. Tan, together with an English merchant in Singapore, drafted a letter to Governor Sir Andrew Clarke which Abdullah signed. The letter expressed Abdullah's desire to place Perak under British protection, and "to have a man of sufficient abilities to show (him) a good system of government." In 1874, the Straits Settlements governor Sir Andrew Clarke convened a meeting on Pulau Pangkor, at which Sultan Abdullah was installed on the throne of Perak in preference to his rival, Sultan Ismail. This Pangkor Treaty also required that the Sultan of Perak accept a British Resident, a post granted wide administrative powers.

In 1875, various Perak chiefs assassinated the British Resident James W. W. Birch, resulting in the short-lived Perak War of 1876. Sultan Abdullah was exiled to the Seychelles, and the British installed a new ruler. The new resident, Sir Hugh Low, was well-versed in the Malay language and local customs, and proved to be a more capable administrator. He also introduced the first rubber trees in Malaya. Perak joined Selangor, Negeri Sembilan and Pahang to form the Federated Malay States in 1896. However, the British Resident system persisted until the Malayan Union was established in 1948. Perak (as a component of the Federation of Malaya) gained its independence from the British on 31 August 1957. 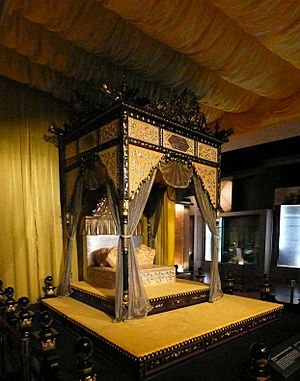 Under the laws of the Constitution of Perak, Perak is a constitutional monarchy, with a constitutional hereditary ruler. The current Sultan of Perak is Sultan Nazrin Muizzuddin Shah, the 35th Sultan of Perak. He was appointed as the new Sultan on 29 May 2014. The preceding Sultan was Sultan Azlan Muhibbuddin Shah, who was the ninth Yang di-Pertuan Agong of Malaysia and formerly the Lord President of the Supreme Court of Malaysia who died on 28 May 2014. 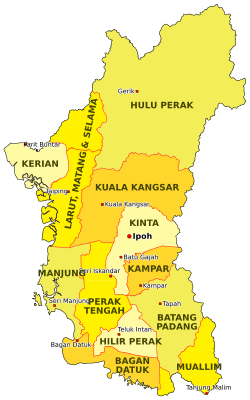 It has been announced on 26 November 2015 that Perak would have its eleventh district, which is called Muallim, which includes the sub-district of Tanjung Malim which has split it from the current Batang Padang District. It has been officiated by Sultan Nazrin, the current Sultan on 11 January 2016.

On 9 January 2017, Sultan of Perak Sultan Nazrin Muizzuddin Shah graced the proclamation of Bagan Datuk as the 12th district of the state. The proclamation marked the start of transformation for the district, which is one of the biggest coconut producers in Malaysia.

Once Malaysia's most populous state, Perak has yet to recover from the decline of the tin-mining industry. The economic downturn resulted in massive manpower drain to higher-growth states such as Penang, Selangor and Kuala Lumpur.

Perak's population grew at an annual rate of around 0.4%. The growth of population in recent years: 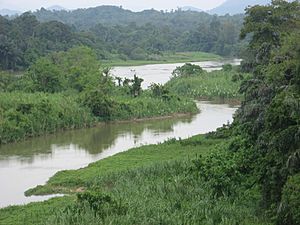 Perak covers an area of 21,035 km2 (8,122 sq mi), making up 6.4 per cent of total land mass in Malaysia. It is the second-largest Malaysian state in the Malay Peninsula, and the fourth-largest in the whole of Malaysia.

The longest river in Perak is the Perak River (Malay: Sungai Perak), it originates in the mountains at the Perak-Kelantan-Thailand border, and empties into the Strait of Malacca. It is the second-longest river in Peninsular Malaysia, after the Pahang River.

Perak's days are warm and sunny, while its nights are cool the whole year through, with occasional rains in the evenings. Temperature is fairly constant, that is, from 23 °C to 33 °C, with humidity often more than 82.3 per cent. Annual rainfall measures at 3,218 mm. 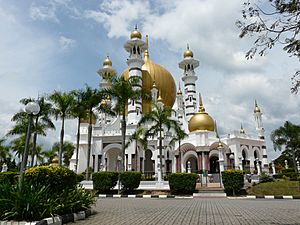 The Lost World of Tambun theme park is surrounded by a 400-million-year-old limestone mountain, and includes a 175-room hotel.

Kuala Kangsar, just 48 km north of Ipoh on the Perak River, is the royal town. It is dominated by three buildings: Istana Iskandariah, Istana Kenangan and the Ubudiah Mosque. The Istana Iskandariah, located on a hill overlooking the river, is the palace of the Sultan of Perak. Istana Kenangan, which was constructed as a temporary residence during the Iskandariah's construction is known for its architecture. The Ubudiah Mosque is an impressive structure topped with a constellation of bright golden domes.

Perak State Museum is located in Taiping, and is the oldest museum in Malaysia.

Kellie's Castle is located in Batu Gajah. It was built in 1915 and was never completed as the owner William Kellie Smith died in Lisbon, with his widow selling the property and returning to Scotland. The castle is perched on top of a hill in what used to be a rubber estate. The castle was once believed to be haunted, with many secret rooms and a hidden tunnel. Today, it is opened as a tourist attraction.

The Gua Tempurung cave is located between Gopeng and Kampar. During peak season, it is packed with locals and tourists.

Accessible from Lumut, the Pangkor Island holds a mix of fishing settlements and white beaches decked with rich vegetation. The warm waters are used for swimming and diving. Resorts are available for accommodation on the island. Pangkor's two popular beach areas are Pasir Bogak and Teluk Nipah which offer activities such as scuba-diving, snorkelling, wind-surfing and fishing. Teluk Ketapang (Turtle Bay) still receives turtles on their egg-laying pilgrimages.

A white water rafting location in Perak is at My Gopeng Resort (Gopeng). White-water rafting (Grade 3), waterfall abseiling, rafflesia's flower trekking, jungle trekking and others adventures are part of the joy of visiting Perak.

Beside rafting, many admire Gaharu from Gaharu Tea Valley Gopeng a kind of Agarwood which can be processed as tea. Rumor has it that whoever captures a picture with the tall King Wood will bring in a windfall. Hong Kong director Raymond Wong Bak-Ming believed had a close relationship with the farm owner.

The Belum-Temengor Forest Reserve is one of the largest untouched forest reserves in the peninsula, with exotic mammals such as elephants, rhinoceroses, tapirs and tigers. Guided tours are available for visitors.

Founded in 1844, Bukit Larut (Maxwell Hill) is the wettest place in Malaysia, with an annual rainfall of over 500 cm. The hill has views on a clear day where the peninsular coastline and the Straits of Malacca are visible, sometimes stretching as far as Penang to the north and Pangkor Island to the south.

The Taiping Lake Gardens was built on top of an abandoned tin mine, and opened in 1880, the first public garden in Malaya. Spread over 64 hectares, the lake system has ten lakes and ponds, a lotus pool, bridges, tracks for jogging and reflexology, a roller-skating rink, paddleboat rides, and a playground, all surrounded by tropical plants, flowers, trees and wildlife. 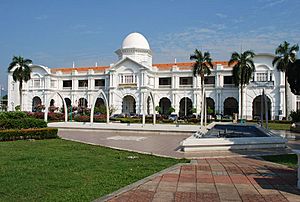 The railway service is undergoing major upgrading with the advent of electrified trains running on double tracks from Kuala Lumpur to Ipoh. Ipoh railway station is in the city centre. Built in the Moorish style, this white structure, nicknamed the Taj Mahal of Ipoh, was completed in 1935 to replace the original railway platform shed built in 1917.

Lemang, a Malay delicacy made from glutinous rice cooked in a bamboo tube over slow fire is a must-have during the festivities such as Hari Raya Aidilfitri and Hari Raya Haji, especially along with some rendang. Some say lemang originated from the indigenous people who cook their rice using bamboo.

Tempoyak is another Malay delicacy. It is durian extract which is preserved and kept in an urn. Commonly eaten with chillies and other dishes, it is well known due to the popularity of its key ingredient, durian, among the locals. Tambun pomelo, the most popular fruit in Perak, is another tropical delight.

All content from Kiddle encyclopedia articles (including the article images and facts) can be freely used under Attribution-ShareAlike license, unless stated otherwise. Cite this article:
Perak Facts for Kids. Kiddle Encyclopedia.