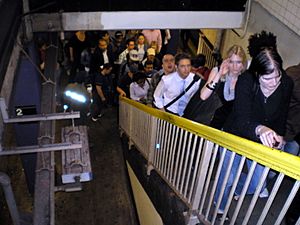 A rush hour or peak hour is a part of the day during which traffic on roads and crowding on public transport is most. Normally, this happens twice a day—once in the morning and once in the evening. These are the times during when the most people commute.

All content from Kiddle encyclopedia articles (including the article images and facts) can be freely used under Attribution-ShareAlike license, unless stated otherwise. Cite this article:
Rush hour Facts for Kids. Kiddle Encyclopedia.