Kedah is a state of Malaysia, located in the northwestern part of Peninsular Malaysia. The state covers a total area of 9,425 km², and consists mostly of flat areas growing rice, plus the island of Langkawi. It was called Syburi by the Siamese when it was under their influence.

To the north are the state of Perlis and the international boundary with Thailand, to the south and southwest are Perak and Penang respectively.

The Arabic meaning of Kedah is Darul Aman ("Abode of Peace").

Pedu Lake is the largest man-made lake in the state. 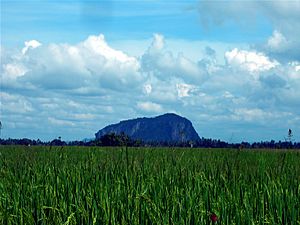 A paddy field in Kedah

Kedah is considered the "rice bowl" of Malaysia, producing one third of Malaysia's total production of rice. Other agricultural products, including rubber, oil palm and tobacco are also important. Tourism, particularly on the island of Langkawi is of growing importance.

More recently Kedah has forged its economy towards the automotive and aerospace industry with Modenas and Asian Composites setting up base here. One of the main advantages is the low labour costs and the infrastructure in place with the highway and Penang International Airport on its door step.

In 1996, The Kulim Hi-Tech Park (KHTP) which was officially opened and became the first high technology industrial park in Malaysia. The Park is situated in Kulim. Many local and foreign companies such as Intel, Fuji Electric, Showa Denko, SilTerra have moved into the site since then.

All content from Kiddle encyclopedia articles (including the article images and facts) can be freely used under Attribution-ShareAlike license, unless stated otherwise. Cite this article:
Kedah Facts for Kids. Kiddle Encyclopedia.