Due to its close proximity to Penang, Sungai Petani is also part of Greater Penang, Malaysia's second largest conurbation, with the town's logistical needs being served by Penang's well developed transportation infrastructure. Sungai Petani has experienced heavy industrialisation since the 1990s, when Japanese and other international firms began to set up manufacturing plants around the town.

Sungai Petani has a high and medium-sized business community. A lot of small and medium industry also play a part in the local economy, producing many products, from semiconductors to television tubes and from textile to wood products. One of the examples is Sharp. Sungai Petani is also a booming business center with many large malls, franchise stores and business enclaves.

The nearest airport is the Penang International Airport on Penang Island. Another alternative airport is the Sultan Abdul Halim Airport, Alor Star (the state capital of Kedah).

Sungai Petani offers high potential of growth in tourism industry specifically in Historic Themes, Ecotourism and Aqua sports. The district of Kuala Muda, in which Sungai Petani is, has the 2nd largest mangrove area in the country. Ecotourism is now in continuous development. From Sungai Emas to Bukit Meriam, Bujang/Merbok, Pulau Tiga and Kota Kuala Muda one can trace the path of Kedah ancient capitals.

Pulau Tiga, near Laguna Merbok was once the location of His Highness Sultan Ahmad Tajuddin's palace and his headquarters after being defeated and drove away by the Siamese in the Battle for Kuala Kedah Fort in the 18th. century. For not so long after, the Siamese attacked the new palace and razed it down. The Sultan escaped to Penang and then Malacca. Kedah was then broken into several administrative territories and ruled by respective Siamese Military Governors. A few years later, after a peace negotiation, the Siamese agreed to re-install His Highness as the Sultan of Kedah with a new throne at the Kuala Muda Fort. The smaller territories were then merged back as Kedah state with the military governors replaced by a Siamese Resident Advisor.

The present military camp was a RAF Aerodrome during the WWII and was heavily bombed by the Japanese Airforce on the first day of the invasion of Malaya. The 6th. Brigade (Army) was historically full of military exploits/combats/battles during the Communist Insurgency in the 1970s. There are a large numbers of military cemeteries of Ghurkas' and Commonwealth soldiers. There a number of fallen heroes during the insurgency that came from this command. One was the downing of a Nuri helicopter by the rebels near the Thai border that killed more than a dozen soldiers. The communists had ceased all hostilities since 1989, when a peace treaty with the Malaysian government was signed.

The military camp also is the headquarters of the 19th. Royal Malay Regiments with war records such as the famous Black Hawk Downs battle in Mogadishu, Somalia. They helped rescued the surrounded US soldiers with one casualty of their own Regiment members.

The bloody legend of Raja Bersiong (the King with Fangs) whom was believed to be one of the rulers of ancient Kedah was originated from the Lembah Bujang (or Bujangha in Sanskrit = Big Snake = Dragon), one of the 2 valleys (Lembah Muda is the other) that covers half of the Sungai Petani surrounding landscape. The other half is the highland of Gunung Jerai. There are two major rivers Sungai Merbok and Sungai Muda that are suitable for aquasport. There are also abandoned open mining/quarry pools that are suitable for water tourism. Gunung Jerai offers an abundance of waterfalls.

The major of Sungai Petani is a clock tower on the main street, Jalan Ibrahim. The clock tower was built in 1936. It is 12.1 m in height. It is topped by a dome-shaped and gold coloured structure. The tower was a present from Lim Lean Teng to George V and Queen Mary to commemorate the Silver Jubilee. 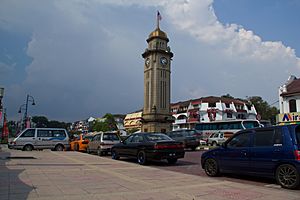 Sungai Petani is also known for its green lungs and attractions. In the heart of the town is the Jubli Perak (Silver Jubilee) public park and also Bird Park. There are more than five golf courses around Sungai Petani, as well as various streams, rivers and lakes.

The Sungai Petani Club (SP Club) is a meeting and recreational venue for the residents of Sungai Petani. In the middle of the town, it is the oldest golf club in the State of Kedah, having been established in 1922 by British planters. The unique colonial facade and antique wooden interiors of the clubhouse would render it as a heritage site in Sungai Petani. The 9-hole golf course covering 40 acres (160,000 m2) of prime land provides green space to balance the rapid pace of development of the town with environmental conservation.

Cinta Sayang Golf & Country Resort is only 30 minutes from Penang and Kedah's capital, Alor Setar. Its strategic location gives the Resort an advantage as a tour and shopping agent to Penang, Langkawi and Hat Yai. Cinta Sayang Golf & Country Resort was an 18-hole golf course with only 50-room chalets. Throughout the years, with constant development and upgrading, the Resort is now a proud 4-star golf resort, awarded by the Minister of Tourism Malaysia. 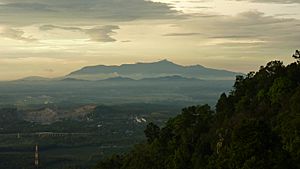 A view of Gunung Jerai at dusk

In the northern part of the town, about 30 kilometres away, is the famous Gunung Jerai. Gunung Jerai is 1,217 metres from the sea level. This is the tallest mountain in the northern region and is surrounded by a vast jungle. It is a navigational point for ships entering the Straits of Malacca from the north because it is visible from far. There is an 18 km trekking route to the top of the mountain through a winding road. Atop the Jerai is a resort and the mountain boasts some tall and cooling waterfalls. Historically, the Jerai mountain served as the navigational point for traders from the east and west. There was a Hindu temple on top of the mountain that was built nearly a thousand years ago during the Bujang Valley Hindu Civilization.

The only beach in mainland Kedah, it is a major attraction for beach goers from all over mainland Penang and Kedah State. Various accommodation is available for rent to experience the beach and other attractions in the area which includes harvesting Kepah, Siput Kemudi and Kerang (local seafood) in Kampung Tepi Sungai, Kota Kuala Muda, Pantai Merdeka itself and also at Pulau Sayak. Pantai Merdeka is also a gateway to island activities in small islands called Pulau Bidan and Pulau Telor which are a few minutes boat ride away. These areas are for fishing and its beaches. In addition to that Kota Kuala Muda has an old fort used to be the fort of the Raja Muda of Kedah during its time. There is also an archeology site in Kota Kuala Muda where precious stones panning were done few hundred years ago. 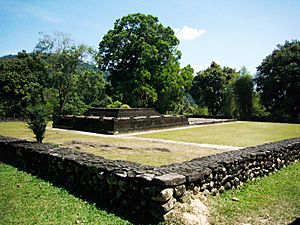 One of the candi at Bujang Valley

The Bujang Valley or Lembah Bujang, sometimes referred to as the Ancient Wonder of Kedah, is a rich historical site covering an area of about 400sq. km in Merbok (17 km from Sungai Petani), bounded by Bukit Coras (Choras Hill) and Gunung Jerai. This archaeological area was the site of an ancient Hindu-Buddhist kingdom that ruled the region from the 4th century AD. There is also an archaeological museum here which is known as The Lembah Bujang Archaeological Museum. This museum displays more than 2,500 artifacts from Malaysia's earliest civilization that have been unearthed from the surrounding excavation sites. Gold, gems, ceramics, Hindu gods and beautiful Buddha stone statues dating from the third to 14th centuries are all on display, though its main feature is Chandi Bukit Batu Pahat, a reconstructed temple built to worship the Hindu god Shiva.

All content from Kiddle encyclopedia articles (including the article images and facts) can be freely used under Attribution-ShareAlike license, unless stated otherwise. Cite this article:
Sungai Petani Facts for Kids. Kiddle Encyclopedia.