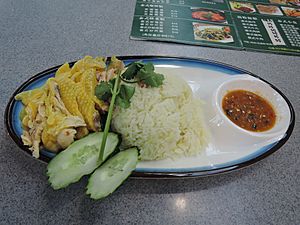 Hainanese chicken rice is a dish created by the people of Hainan. Hainan is an island that is to the south of China. It is a plate of chicken served with rice cooked in chicken oil.

Boil a large pot of water. Stuff the body of the chicken with scallion and ginger. Add chicken to boiling water, breast side-down. Lower the heat to a simmer just under boiling point and cook, covered until just cooked through, about 40 minutes. Bathe the chicken in an ice water bath till chicken is cold to create a nice texture. Heat oil in a rice cooker, add garlic, stir fry till fragrant. Add uncooked rice, stir fry for two minutes, add salt and enough chicken soup to cover 1/2 inch above the top of the rice. Boil on high heat, lower heat when steam holes form, cover and steam for 30 minutes till rice is cooked. Chop chicken and serve with steaming hot rice and chili sauce. Dark soya sauce is the ideal accompaniment.

All content from Kiddle encyclopedia articles (including the article images and facts) can be freely used under Attribution-ShareAlike license, unless stated otherwise. Cite this article:
Hainanese chicken rice Facts for Kids. Kiddle Encyclopedia.