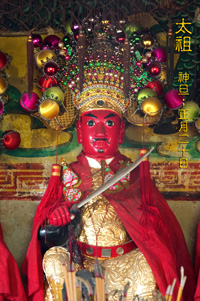 Statue of a Taizu deity (deified important ancestor) inside a temple in Maoming, Guangdong.

Altar to the Five Officials worshipped inside the Temple of the Five Lords in Haikou, Hainan.

Chinese folk religion (Chinese: 中国 民间 信仰 (simplified spelling) or 中國 民間 信仰 (traditional spelling), zhōng-guó mín-jiān xìn-yǎng) is a religion that has been practiced in China, and in areas inhabited by Chinese people. It is difficult to make a clear distinction between Chinese folk religion and other beliefs, because Chinese folk religion has elements of veneration of the dead, local spirits, clan spirits and traditional Eastern religions, such as Taoism, Confucianism, Buddhism, but also superstition, geomancy and Feng shui. There is no standarized mythology or clergy: rites are often performed by the father of a family. Since the 1950s, Chinese folk-religion is also sometimes refered to as Shenism or Shénism (Chinese: Shén-jiào, 神教),. In this context, shen refers to a spirit or a deity. The term Shenism was first used by A. J. A Elliot in 1955. The term Chinese folk religion is not used inside China.

Sometimes, it is classified with Taoism: Over the centuries, Taoism became institutionalised. During that time, it tried to use local customs, and to become similar to local religions and beliefs. It would however be more accurate to say that Taoism developed from Shenism, since Shenism was there before. Taoism also developed from Chinese philosophy. With around 454 million adherents, or about 6.6% of the world population, Chinese folk religion is one of the major religious traditions in the world. In China more than 30% of the population adheres to Shenism or Taoism.

During the last 200 years, religion has been heavily suppressed in China, with rebellions such as the Taiping Movement or Cultural Revolution. Today, Chinese folk religion is experiencing a major revival in both Mainland China and Taiwan.

The government of Mainland China has officially supported different forms of Shenism, such as Mazuism in Southern China (officially about 160 million Chinese are Mazuists), Huangdi worship, Black Dragon worship in Shaanxi, and Caishen worship.

All content from Kiddle encyclopedia articles (including the article images and facts) can be freely used under Attribution-ShareAlike license, unless stated otherwise. Cite this article:
Chinese folk religion Facts for Kids. Kiddle Encyclopedia.