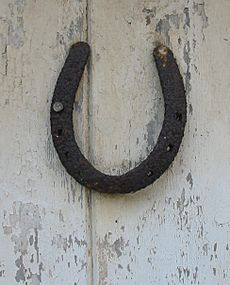 A horseshoe nailed above a doorway is a good luck charm if it looks like a U. 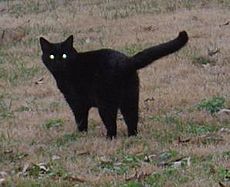 A black cat can be considered good luck or bad luck.

A superstition is a belief in something that is irrational, non-physical and does not follow the rules of science. It is often one action that leads to another without something directly linking the two. Superstition is often associated with luck. Different superstitions often came from beliefs, religions and cultures had in the past and long have been proven wrong. It is a mystery why people don't pay attention to facts and still believe in superstitions.

There are many superstitions believed in around the world. Most people believe superstitions to be complete nonsense while others live their lives avoiding black cats, looking for four leaf clovers and avoiding mirrors.

All content from Kiddle encyclopedia articles (including the article images and facts) can be freely used under Attribution-ShareAlike license, unless stated otherwise. Cite this article:
Superstition Facts for Kids. Kiddle Encyclopedia.