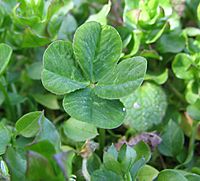 A four-leaf clover is often considered to bestow good luck.

Cultural views of luck vary from perceiving luck as a matter of random chance to attributing to luck explanations of faith or superstition. For example, the Romans believed in the embodiment of luck as the goddess Fortuna, while the philosopher Daniel Dennett believes that "luck is mere luck" rather than a property of a person or thing.

Lucky symbols are popular worldwide and take many forms. 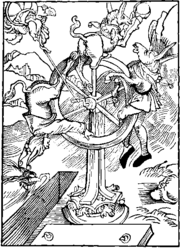 Luck is an important factor in many aspects of society.

A game may depend on luck rather than skill or effort. For example, Chess does not involve any random factors such as throwing dice, while Dominoes has the "luck of the draw" when selecting tiles.

Many countries have a national lottery. Individual views of the chance of winning, and what it might mean to win, are largely expressed by statements about luck. For example, the winner was "just lucky" meaning they contributed no skill or effort.

"Leaving it to chance" is a way of resolving issues. For example, flipping a coin at the start of a sporting event may determine who goes first.

Different thinkers like Thomas Kuhn have discussed the role of chance in scientific discoveries.

All content from Kiddle encyclopedia articles (including the article images and facts) can be freely used under Attribution-ShareAlike license, unless stated otherwise. Cite this article:
Luck Facts for Kids. Kiddle Encyclopedia.