Geckos are small to middle size lizards. Lizards are reptiles. There are 1196 different kinds of geckos. They live in many warm countries. Some kinds of geckos go into people's houses. People are often happy to have them, because geckos eat many insects.

Unlike most lizards, geckos have voices. A gecko sounds a little like a bird or a frog. In some languages these lizards have names that sound like their calls, for example, both English and Indonesian call one kind gecko (gek KO) and tokay (to-KAY). Another kind of gecko, with a different sound, is called chicak (CHEE chak).

Geckos have no eyelids. Instead, they have a clear membrane (skin) over their eyes. They lick the membrane clean with their tongues. Like most lizards, they can regenerate their tail if they need to.

Many kinds of geckos can walk on walls, windows and ceilings. They can do this because they have special toe pads. A microscope can show that each toe pad is made of thousands of hair-like structures. Each of these structures branches into many smaller ends.

Geckos' feet form a molecular bond with the substance that they are walking on in order to "stick" to the surface. 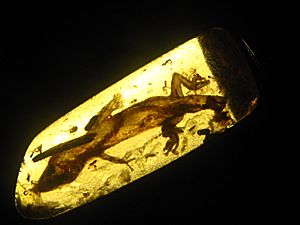 Geckos occur in various patterns and colors, and are among the most colorful lizards in the world. Some species can change colour and may be lighter in colour at night. Some species are parthenogenetic, which means the female is capable of reproducing without copulating with a male. This improves the gecko's ability to spread to new islands. However, in a situation where a single female gecko populates an entire island, the island will suffer from a lack of genetic variation within the geckos that inhabit it. The gecko's mating call sounds like a shortened bird chirping which attracts males, when they are nearby. Like other reptiles, geckos are ectothermic, producing very little metabolic heat. Essentially a gecko's body temperature is dependent on its environment. Also, in order to accomplish their main functions—such as locomotion, feeding, reproduction, etc.—geckos must have a relatively elevated temperature.

All geckos shed their skin at fairly regular intervals, with species differing in timing and method. Leopard geckos will shed at about two- to four-week intervals. The presence of moisture aids in the shedding. When shedding begins, the gecko will speed the process by detaching the loose skin from its body and eating it. 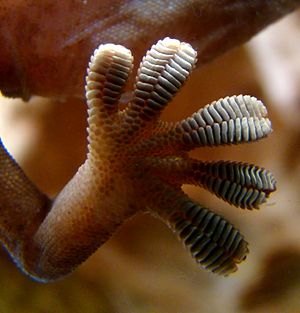 About 60% of gecko species have adhesive toe pads that allow them to adhere to most surfaces without the use of liquids or surface tension. Such pads have been gained and lost repeatedly over the course of gecko evolution. Adhesive toepads evolved independently in about 11 different gecko lineages and were lost in at least 9 lineages. The spatula-shaped setae arranged in lamellae on gecko footpads enable attractive van der Waals' forces between the β-keratin lamellae/setae/spatulae structures and the surface. These van der Waals interactions involve no fluids; in theory, a boot made of synthetic setae would adhere as easily to the surface of the International Space Station as it would to a living-room wall, although adhesion varies with humidity. The setae on the feet of geckos are also self-cleaning and will usually remove any clogging dirt within a few steps.

Teflon, which has very low surface energy, is more difficult for geckos to adhere to than many other surfaces.

Increasing humidity typically fortifies gecko adhesion, even on hydrophobic surfaces, yet is reduced if completely immersed in water. The role of water in that system is under discussion, yet recent experiments agree that the presence of molecular water layers (water molecules carry a very large dipole moment) on the setae as well as on the surface increase the surface energy of both, therefore the energy gain in getting these surfaces in contact is enlarged, which results in an increased gecko adhesion force. Moreover, the elastic properties of the b-keratin change with water uptake. Friction experiments with gecko toes—torn parallel to surfaces—have shown to be influenced also by electrostatic forces.

Gecko toes seem to be "double jointed", but this is a misnomer and is properly called digital hyperextension. Gecko toes can hyperextend in the opposite direction from human fingers and toes. This allows them to overcome the van der Waals force by peeling their toes off surfaces from the tips inward. In essence, by this peeling action, the gecko separates spatula by spatula from the surface, so for each spatula separation, only some nN are necessary. (The process is similar to removing scotch tape from a surface.)

Geckos' toes operate well below their full attractive capabilities most of the time, because the margin for error is great depending upon the surface roughness, and therefore the number of setae in contact with that surface. 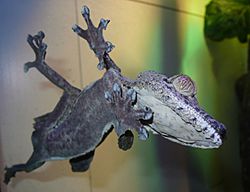 Use of small van der Waals attraction force requires very large surface areas: every square millimeter of a gecko's footpad contains about 14,000 hair-like setae. Each seta has a diameter of 5 μm. Human hair varies from 18 to 180 μm, so the cross-sectional area of a human hair is equivalent to 12 to 1300 setae. Each seta is in turn tipped with between 100 and 1,000 spatulae. Each spatula is 0.2 μm long (one five-millionth of a meter), or just below the wavelength of visible light.

The setae of a typical mature 70 g (2.5 oz) gecko would be capable of supporting a weight of 133 kg (293 lb): each spatula can exert an adhesive force of 5 to 25 nN. The exact value of the adhesion force of a spatula varies with the surface energy of the substrate to which it adheres. Recent studies have moreover shown that the component of the surface energy derived from long-range forces, such as van der Waals forces, depends on the material's structure below the outermost atomic layers (up to 100 nm beneath the surface); taking that into account, the adhesive strength can be inferred.

Recent studies have also revealed that apart from the setae, phospholipids—fatty substances produced naturally in their bodies—also come into play. These lipids lubricate the setae and allow the gecko to detach its foot before the next step.

The origin of gecko adhesion likely started as simple modifications to the epidermis on the underside of the toes. This was recently discovered in the genus Gonatodes from South America. Simple elaborations of the epidermal spinules into setae have enabled Gonatodes humeralis to climb smooth surfaces and sleep on smooth leaves.

Biomimetic technologies designed to mimic gecko adhesion could produce reusable self-cleaning dry adhesives with many applications. Development effort is being put into these technologies, but manufacturing synthetic setae is not a trivial material design task. 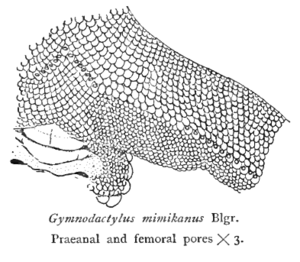 Pores on the skin are often used in classification.

Gecko skin does not generally bear scales but appears at a macro scale as a papillose surface which is made from hair-like protuberances developed across the entire body. These confer superhydrophobicity and the unique design of the hair confers a profound antimicrobial action. These protuberances are very small, up to 4 microns in length, and tapering to a point.

Geckos are polyphyodonts and able to replace each of their 100 teeth every 3 to 4 months. Next to the full grown tooth there is a small replacement tooth developing from the odontogenic stem cell in the dental lamina. The formation of the teeth is pleurodont; they are fused (ankylosed) by their sides to the inner surface of the jaw bones. This formation is common in all species in the order Squamata.

All content from Kiddle encyclopedia articles (including the article images and facts) can be freely used under Attribution-ShareAlike license, unless stated otherwise. Cite this article:
Gecko Facts for Kids. Kiddle Encyclopedia.