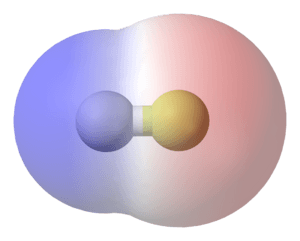 Negatively charged electrons orbit molecules or ions. The electrons create slightly different charges from one end of the molecule to the other. These slight differences are called partial charges, as δ- or δ+.

All content from Kiddle encyclopedia articles (including the article images and facts) can be freely used under Attribution-ShareAlike license, unless stated otherwise. Cite this article:
Van der Waals force Facts for Kids. Kiddle Encyclopedia.