Squamata ("scaled reptiles") is the order of reptiles which includes lizards and snakes.

They are the most variably-sized order of reptiles, ranging from the 16 mm (0.63 in.) Dwarf gecko (Sphaerodactylus ariasae) to the 8 m (26 ft.) Green Anaconda (Eunectes murinus).

This is the only living reptile group which has both viviparous and ovoviviparous species, as well as the usual oviparous (egg-laying) reptiles.

The Squamata does not include the Tuataras from New Zealand. They are a sister group to the squamates. The Crocodilia are much more distantly related. 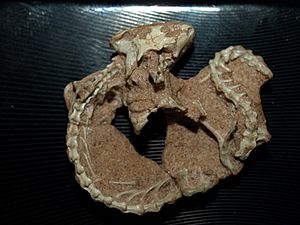 Squamate fossils first appear in the early Jurassic, but a mitochondrial phylogeny suggests that they evolved in the late Permian. The evolutionary relationships within the squamates are not yet completely worked out, with the relationship of snakes to other groups being most problematic.

From morphological data, Iguanid lizards have been thought to have diverged from other squamates very early, but recent molecular phylogenies, both from mitochondrial and nuclear DNA, do not support this early divergence. Because snakes have a faster molecular clock than other squamates, and there are few early snake and snake ancestor fossils, it is difficult to resolve the relationship between snakes and other squamate groups.

Recent research suggests that the evolutionary origin of venom lies deep in the squamate phylogeny. 60% of squamates are venomous Toxicofera.

Venom in the families Caenophidia, Anguimorpha, and Iguania evolved once, then the three families diverged. All three lineages share nine common toxins. The fossil record shows that the divergence between anguimorphs, iguanians, and advanced snakes dates back roughly 200 MYA to the Upper Triassic/Lower Jurassic.

Snake venom evolved by the duplication of a gene encoding for a normal regulatory or bioactivity protein. Then the copy was expressed in the venom gland.

Different toxins have been recruited from different proteins and are diverse as the functions themselves.

Natural selection has driven the diversification of the toxins to counter the defences of the prey. Venom genes form large multigene families, and evolve by protein evolution. This leads to a diversification of toxins that let sit-and-wait predators attack a wide range of prey.

The rapid evolution and diversification is the result of a prey/predator evolutionary arms race where each adapts to counter the other.

Classically, the order is divided into three suborders:

Of these, the lizards form a paraphyletic group. In newer classifications the name Sauria is used for reptiles and birds in general, and the Squamata are divided differently: 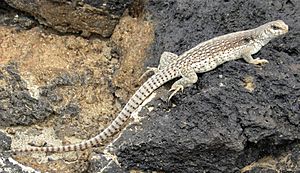 Historically, the order Squamata has been divided into three suborders:

Of these, the lizards form a paraphyletic group, since "lizards" excludes the subclades of snakes and amphisbaenians. Studies of squamate relationships using molecular biology have found several distinct lineages, though the specific details of their interrelationships vary from one study to the next. One example of a modern classification of the squamates is

The over 10,000 extant squamates are divided into 58 families.

All content from Kiddle encyclopedia articles (including the article images and facts) can be freely used under Attribution-ShareAlike license, unless stated otherwise. Cite this article:
Squamata Facts for Kids. Kiddle Encyclopedia.