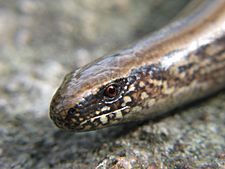 Closeup of the head of a slow-worm

Anguis fragilis (the slow-worm, or blindworm) is a lizard which is limbless (meaning it has no legs or arms). It has a wide distribution in Europe and Asia, and is one of the few reptiles native to Britain.

When a slow-worm is in danger it can shed (break off) its tail and escape. It can then grow back a new, shorter tail, which it cannot shed.

The female often has a stripe along the back and the male may have blue spots.

Instead of laying eggs, the females give birth to live young (viviparous birth). In the days leading up to birth the female can often be seen basking in the sun on a warm road.

Slow-worms are often called snakes, but they are not. Slow-worms can blink, but snakes cannot. They shed their skin in patches like other lizards, rather than the whole skin as most snakes do.

Adult slow-worms grow to be about 50 centimetres long. They are known for their very long life. One was said to have been fifty four years old.

There are not as many slow-worms as there used to be. Many places where they used to live have been built on. In gardens they can be killed by cats.

All content from Kiddle encyclopedia articles (including the article images and facts) can be freely used under Attribution-ShareAlike license, unless stated otherwise. Cite this article:
Anguis fragilis Facts for Kids. Kiddle Encyclopedia.