The perentie (Varanus giganteus) is the largest monitor lizard or goanna native to Australia, and the fourth-largest living lizard on earth, after the Komodo dragon, Asian water monitor, and crocodile monitor. Found west of the Great Dividing Range in the arid areas of Australia, it is rarely seen because of its shyness and the remoteness of much of its range from human habitation. The species is considered to be a least-concern species according to the International Union for Conservation of Nature.

Its status in many Aboriginal cultures is evident in the totemic relationships, and part of the Ngiṉṯaka dreaming, as well as bush tucker. It was a favoured food item among desert Aboriginal tribes, and the fat was used for medicinal and ceremonial purposes.

Within the monitor genus Varanus, it lies within the subgenus Varanus. Its closest relatives belong to a lineage that gave rise to the sand goanna and the Argus monitor.

The lizard can grow up to 2.5 m (8 ft 2 in) long, although the typical length is around 1.7 to 2.0 m (5 ft 7 in to 6 ft 7 in) and weigh up to 15 kg (33 lb)—maximum weight can be over 20 kg (44 lb). Its rival for the title of the third-largest lizard is the crocodile monitor, which although often longer, exceeding 2.4 m in length, is lighter and less bulky than the perentie. However, perenties are relatively lean lizards and are less bulky than either the Komodo dragon or the Asian water monitor.

In late 2005, University of Melbourne researchers discovered that all monitors may be somewhat venomous. Previously, bites inflicted by monitors were thought to be prone to infection because of bacteria in their mouths, but the researchers showed that the immediate effects are caused by mild envenomation. Bites on the hand by Komodo dragons, (V. komodensis), perenties (V. giganteus), lace monitors (V. varius), and spotted tree monitors (V. scalaris) have been observed to cause swelling within minutes, localised disruption of blood clotting, and shooting pain up to the elbow, which can often last for several hours.

University of Washington biologist Kenneth V. Kardong and toxicologists Scott A. Weinstein and Tamara L. Smith have argued that the suggestion of venom glands "... has had the effect of underestimating the variety of complex roles played by oral secretions in the biology of reptiles, produced a very narrow view of oral secretions and resulted in misinterpretation of reptilian evolution". According to the scientists "... reptilian oral secretions contribute to many biological roles other than to quickly dispatch prey". They concluded, "Calling all in this clade venomous implies an overall potential danger that does not exist, misleads in the assessment of medical risks, and confuses the biological assessment of squamate biochemical systems".

Perenties are found in the arid desert areas of Western Australia, South Australia, the Northern Territory, and Queensland. Their habitats consist of rocky outcroppings and gorges, with hard-packed soil and loose stones.

Perenties generally avoid human contact and often retreat before they are seen. Being able diggers, they can excavate a burrow for shelter in only minutes. Their long claws enable them to easily climb trees. They often stand on their back legs and tails to gain a better view of the surrounding terrain. This behaviour, known as "tripoding", is quite common in monitor species. Perenties are fast sprinters, and can run using either all four legs or just their hind legs.

Typical of most goannas, the perentie either freezes (lying flat on the ground, and remaining very still until the danger has passed) or runs if detected. If cornered, this powerful carnivore stands its ground and uses its arsenal of claws, teeth, and whip-like tail to defend itself. It can inflate its throat and hiss as a defensive or aggressive display, and can strike at opponents with its muscular tail. It may also lunge forward with an open mouth, either as a bluff or as an attack. The bite of a perentie can do much damage, not only from the teeth, but also because of the oral secretions.. 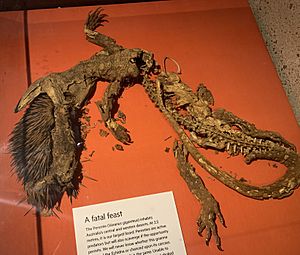 Mummified perentie that died trying to eat an echidna.

Perenties are highly active carnivores that feed on mostly reptiles, small mammals, and less commonly birds such as diamond doves. They hunt live prey, but also scavenge carrion. Reptilian prey includes mostly lizards and more seldom snakes, but this species also displays a notable example of intraguild predation, as it eats an unusually large number of other monitor lizard species such as ridge-tailed monitors, black-headed monitors, Gould's monitors, and even Argus monitors. Perenties also eat smaller members of their own species; such is the case of a 2-m perentie killing and eating a 1.5-m perentie. Other lizard prey include eastern bearded dragons and long-nosed water dragons. Coastal and island individuals often eat a large number of sea turtle eggs and hatchlings, and hide under vehicles to ambush scavenging gulls. Mammalian prey includes bats, young kangaroos & other small marsupials, and rodents. They have also been occasionally seen foraging for food in shallow water. Although adults feed predominantly on vertebrate prey, young perenties eat mostly arthropods, especially grasshoppers.

Prey is typically swallowed whole, but if the food item is too large, chunks are ripped off for ease of consumption.

The perentie can lay its eggs in termite mounds or in the soil.

All content from Kiddle encyclopedia articles (including the article images and facts) can be freely used under Attribution-ShareAlike license, unless stated otherwise. Cite this article:
Perentie Facts for Kids. Kiddle Encyclopedia.