Perth Zoo is a 41-acre (17 ha) zoological park in South Perth, Western Australia. The zoo first opened in 1898 and by 2011 housed 1258 animals of 164 species and an extensive botanical collection. It is a full institutional member of the Zoo and Aquarium Association (ZAA) and the World Association of Zoos and Aquariums (WAZA).

The Perth Zoological Gardens were opened on 17 October 1898 by the Governor of Western Australia, Lieutenant-Colonel Sir Gerard Smith. Planning for the zoo had started in 1896 when the Acclimatisation Society first met, the original purpose of which was to introduce European animals to Australia and establish a zoo for conservation purposes. In 1897 this group invited the director of the Melbourne Zoo, Albert Le Souef, to choose a site. His son Ernest was chosen as the first director of the Perth Zoo, and work began in 1897.

The first exhibits built included two bear caves, a monkey house, a mammal house and a model castle for guinea pigs. The first animals on display included an orangutan, two monkeys, four ostriches, a pair of lions, and a tiger. At first there were only six staff members. The zoo had 53,000 visitors in its first nine months, and had not been closed for a single day since it was opened, until it was temporarily closed from 24 March 2020 during the coronavirus outbreak.

From the start Ernest Le Souef worked to create a botanical collection as well as an animal collection to preserve for the future. Work on the gardens started as soon as the site was chosen and finalised. Since the site was mostly sand and lacked nutrients and water, loads of manure needed to be brought in, and a well was bored in 1898 to allow irrigation. The zoo included rose gardens, lupin fields, tropical plants, and palms. The original palm collection still stands and boasts over 61 species including Canary Island date palms that are now over 110 years old. The zoo also grew crops for animals including lettuce, alfalfa, carrots, lucerne and onions. This tradition is still alive, with the zoo producing fodder including hibiscus, bamboo, Fijian fire plant and mirror plant.

The African Savannah replaced a variety of barred cages, and was the largest construction project undertaken at the zoo when it was created. The exhibit recreates the African savannah, and includes African painted dogs, African lions, cape porcupines, Grant's zebras, hamadryas baboons, meerkats, radiated tortoises, Rothschild's giraffes, spotted hyenas and southern white rhinoceroses. Visitors view the animals from a path that simulates a dry riverbed running through the savannah.

The Asian Rainforest is home to a number of threatened Asian species. These include Asian elephants, Asian small-clawed otters, binturongs, Komodo dragons, red pandas, Sumatran orangutans, Sumatran tigers, sun bears, and two exhibits for northern white-cheeked gibbons. Perth Zoo contributes to the conservation of many of these species in the wild. The zoo's Sumatran orangutan breeding program is the most successful in the world, having bred 27 orangutans since 1970. In 2006 and 2011, zoo-born orangutans were released into the wild in Bukit Tigapuluh National Park in Sumatra as part of an international program to re-establish a wild population of the critically endangered ape.

A series of aviary enclosures between the African Savannah and Nocturnal house are home to golden lion tamarins, Bolivian squirrel monkeys and South American coatis. 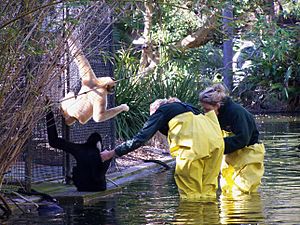 Staff at Perth Zoo tending to the animals

Next to the African Savannah and opposite the Lesser Primates is an exhibit that is home to two Galapagos tortoises.

Near the entrance to the zoo is the Main Lake which has two islands. One is home to a group of black-and-white ruffed lemurs and the other to a family of Javan gibbons. Next to the Main Lake and opposite the cafe are exhibits which are home to the southern cassowary and the Goodfellow's tree kangaroo. It also includes Australian pelicans that move around in the waters.

The Heritage Trail (a map of which can be downloaded from the website or collected from the Information Centre) is a self-guided walk that takes visitors around the zoo and shows off its historical buildings. Buildings included in this walk are the bird feed shed, kite cage, bear caves, hay shed, mineral baths from 1898, replicas of tennis shelters from 1903, the Scout Hall built in 1931, the 1947 carousel that is still in use, and the Gate Zoo Residence that was built in the 1960s. 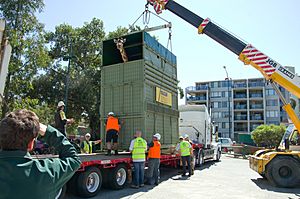 The zoo participates in a number of breeding programs for endangered species, both indigenous Australian and non-native species. Programs include those of the Rothschild's giraffe and white rhinoceros as well as Sumatran tigers and orangutans resulting in several births. Some Australian species are bred for release into managed habitat in Western Australia, whereas the international species are for increasing genetic diversification in zoo populations.

Since 2006, Perth Zoo has made a significant contribution to conservation projects in the Bukit Tigapuluh National Park and the surrounding forested areas which support a rich diversity of life including a new colony of orangutans. These orangutans are part of an international program to reintroduce rescued ex-pet and orphaned Sumatran orangutans into the wild to establish a new population of this critically endangered species. More than 139 orangutans have been released into the area and some have bred.

In November 2006, Perth Zoo released 14-year-old, Perth Zoo-born Sumatran orangutan Temara into Bukit Tigapuluh as part of the reintroduction program. Temara was the first zoo-born orangutan in the world to be released into the wild. This was followed in 2011 with the release of the first male zoo-born orangutan, Semeru, into the wild. Perth Zoo works with the Frankfurt Zoological Society, Indonesian Government and the Australian Orangutan Project on this program and other conservation activities in Bukit Tigapuluh.

Perth Zoo contributes to the conservation of threatened species in the wild through its fundraising program, Wildlife Conservation Action. Started in 2007, funds raised have been used for the conservation of Sumatran orangutan, Sumatran tiger, Sumatran elephant, African painted dog, sun bears, tree kangaroos, Javan gibbons and Australian native species. More than $881,000 has been raised since the program began. 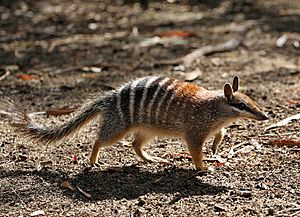 A numbat, one of the many species to benefit from Perth Zoo's involvement.

The numbat (Myrmecobius fasciatus) Western Australia's mammal emblem and one of only two diurnal marsupials, the numbat is the only Australian mammal to feed exclusively on termites. Despite the establishment of several populations by the Department of Environment and Conservation, it is still classified as endangered by the IUCN. Perth Zoo has been breeding numbats for release into the wild since 1986. The first successful birth was in 1993. By early 2011, 165 numbats had been provided by the zoo for release into protected habitat.

The dibbler (Paranthechinus apicalis) is a small carnivorous marsupial found on two islands off the coast of Jurien Bay (island dibblers) and on the south coast of Western Australia within the Fitzgerald River National Park (mainland dibblers). It once had a much wider distribution, but is now classified as endangered by the IUCN. Perth-Zoo-bred dibblers were used to establish a new population on Escape Island in Jurien Bay. The focus has now changed to breeding dibblers from Fitzgerald River National Park for release on the mainland. By early 2011, over 500 dibblers had been provided by the zoo for release into protected habitat.

The frog breeding program is seeking to increase populations of threatened species, including those listed as vulnerable, Spicospina flammocaerulea, Sunset Frog, and Geocrinia vitellina, Orange-bellied Frog, and the critically endangered Geocrinia alba, the white-bellied frog.

The chuditch (Dasyurus geoffroi) or western quoll, is one of four quoll species in Australia and is the largest marsupial predator in Western Australia. At the time of European settlement, chuditch occurred in approximately 70% of the continent. By the late 1980s, they had become endangered, with less than 6,000 remaining in the south-west of Western Australia. Perth Zoo has bred more than 300 chuditch for release in the last decade. Since the breeding program began, the status of chuditch has been modified from endangered to vulnerable. This breeding program is now complete.

Shark Bay mouse (Pseudomys fieldi) also known as djoongari, prior to 1993 the only known population of djoongari was on Bernier Island in the north-west of Western Australia, adjacent to the Shark Bay region and was considered to be one of Australia's most geographically restricted animals. Over 300 Perth-Zoo-bred djoongari have been released to sites on the mainland and on islands in the north-west of Western Australia. This breeding program is now complete.

The central rock-rat (Zyzomys pedunculatus) is a critically endangered rodent that was presumed extinct until it was rediscovered in the MacDonnell Ranges Northern Territory in 1996. The last of the zoo's central rock rats were sent to Alice Springs Desert Park in 2007 and the breeding program closed.

All content from Kiddle encyclopedia articles (including the article images and facts) can be freely used under Attribution-ShareAlike license, unless stated otherwise. Cite this article:
Perth Zoo Facts for Kids. Kiddle Encyclopedia.