The pied heron (Egretta picata), also known as the pied egret is a bird found in coastal and subcoastal areas of monsoonal northern Australia as well as some parts of Wallacea and New Guinea. 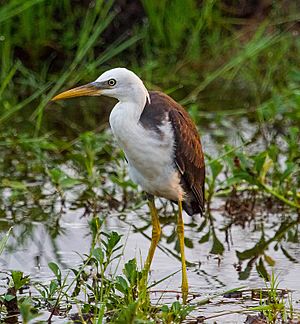 The species was originally described by ornithologist John Gould in 1845. Recent taxonomists put this species in the genus Egretta. There are no recognised subspecies. 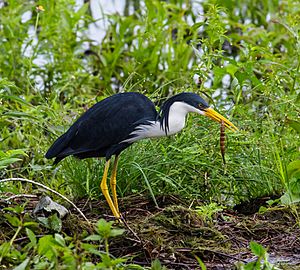 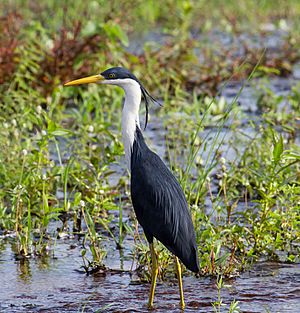 It is a small heron, 43–55 cm long, with dark slaty wings, body, and crested head, with a white throat and neck. The appearance is similar to the white-necked heron. Males (247–280 g) are heavier than females (225–242 g), but the two are similar in appearance.

Immature birds lack the crest as well as the dark colouring on the head and may look like small versions of the white-necked heron. The juveniles were once classified as a separate species.

Its habitat mainly comprises a range of wetlands and wet grasslands.

The call of the pied heron is a loud 'awk' or 'ohrk' in flight. Soft cooing is given around the nest. Little else is known about vocalisations.

Breeding takes place from February to May. It nests in trees above the water, including mangroves, often colonially with other species of heron. 1–2 blue-green eggs are laid in a shallow platform of sticks.

It feeds on insects, frogs, crabs, fish and other small aquatic animals. Insects are the most important source of food. It may feed alone or in groups of up to a thousand individuals.

All content from Kiddle encyclopedia articles (including the article images and facts) can be freely used under Attribution-ShareAlike license, unless stated otherwise. Cite this article:
Pied heron Facts for Kids. Kiddle Encyclopedia.