Goodfellow's tree-kangaroo (Dendrolagus goodfellowi), also called the ornate tree kangaroo, is an animal in the biological family Macropodidae. The family includes kangaroos, wallabies and their relatives, and the genus Dendrolagus, with eleven species. The species live in the rainforests of New Guinea, and the border of central Irian Jaya in Indonesia. In the IUCN Red List of Threatened Species, Goodfellow's tree-kangaroos are listed as endangered. This is a result of too much hunting of them, and humans living too close to their habitat.

Like most tree-kangaroos, Goodfellow's tree-kangaroos are very different looking from terrestrial (land) Kangaroo species. Unlike land living kangaroos, their legs are not very large compared to their forelimbs (arms), which are strong and end in hooked claws for grasping tree branches. Goodfellow's tree-kangaroos have long tails for balance. These physical traits help them with a mostly tree-living life. They have short, woolly fur, usually reddish-brown in color, a gray-brown face, yellow-colored cheeks and feet; pale stomachs, long, golden-brown tails, and two golden stripes on their backsides. They weigh about 7 kilograms (about 15 pounds).

Goodfellow's tree-kangaroos are slow and clumsy on the ground. They move at about the speed a human walks and do not hop well (hopping is something that, by contrast, terrestrial kangaroos are famed for). However, in trees, Goodfellow's tree-kangaroos are fearless and agile. They climb by wrapping their arms around the trunk of a tree and hopping with their strong back legs. This allows their arms to slide. They have very good jumping ability and can jump from trees to the ground from thirty feet up without hurting themselves. 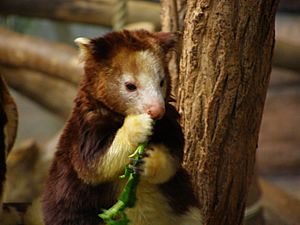 Goodfellow's tree-kangaroos feed mostly on the leaves of the silkwood tree (Flindersia pimenteliana). Other foods are part of their diet when available, including different kinds of fruit, cereals, flowers and grasses. They have large stomachs that they use similar to fermentation vats, much the way the stomachs of cows and related herbivores digest food. First the food is softened in one part of their stomach, and then by passing the material back up and chewing it again, they can return it to a second part of their stomach. This is where bacteria in the stomach's various chambers, breaks down the tough fibers of leaves and grasses.

All content from Kiddle encyclopedia articles (including the article images and facts) can be freely used under Attribution-ShareAlike license, unless stated otherwise. Cite this article:
Goodfellow's tree-kangaroo Facts for Kids. Kiddle Encyclopedia.