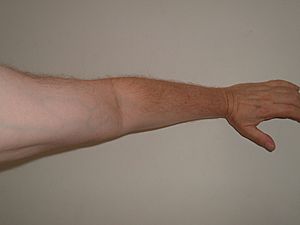 An arm is a limb. Most humans have two arms each, coming out of their body just below the neck. On the end of each arm is a hand. Humans use arms and hands to do things to other objects, this is called manipulation. The main purpose of the hand is to grasp objects. Some other primates have arms which they use to move around by holding onto trees or supporting themselves as they walk along the ground. 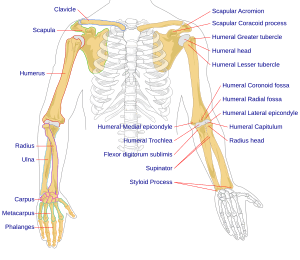 Bones of the upper limbs, together with shoulder girdles, that compose the human arm.

The humerus is one of the three long bones of the arm. It joins with the scapula at the shoulder joint and with the other long bones of the arm, the ulna and radius at the elbow joint. The elbow is the hinge joint between the end of the humerus and the ends of the radius and ulna. The humerus cannot be broken easily. Its strength allows it to handle loading up to 300 pounds (140 kg).

The arm is divided by a fascial layer (known as lateral and medial intermuscular septa) separating the muscles into two osteofascial compartments: the anterior and the posterior compartments of the arm. The fascia merges with the periosteum (outer bone layer) of the humerus. The compartments contain muscles which are innervated by the same nerve and perform the same action.

Two other muscles are considered to be partially in the arm: 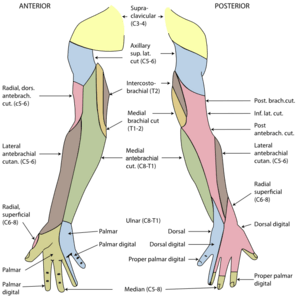 The musculocutaneous nerve, from C5, C6, C7, is the main supplier of muscles of the anterior compartment. It originates from the lateral cord of the brachial plexus of nerves. It pierces the coracobrachialis muscle and gives off branches to the muscle, as well as to brachialis and biceps brachii. It terminates as the anterior cutaneous nerve of the forearm.

The radial nerve, which is from the fifth cervical spinal nerve to the first thoracic spinal nerve, originates as the continuation of the posterior cord of the brachial plexus. This nerve enters the lower triangular space (an imaginary space bounded by, amongst others, the shaft of the humerus and the triceps brachii) of the arm and lies deep to the triceps brachii. Here it travels with the deep artery of the arm, which sits in the radial groove of the humerus. This fact is very important clinically as a fracture of the shaft of the bone here can cause lesions or even transections in the nerve.

Other nerves passing through give no supply to the arm. These include:

All content from Kiddle encyclopedia articles (including the article images and facts) can be freely used under Attribution-ShareAlike license, unless stated otherwise. Cite this article:
Arm Facts for Kids. Kiddle Encyclopedia.