The elbow is a hinge-joint between the bones of the upper and lower arm. It joins the humerus of the upper arm and the radius and ulna of the forearm together. Everyone has 2 elbows. It allows the lower arm to be extended or retracted (moved in). The elbow also allows the arm to turn. It moves by using three ligaments: the anterior, posterior, ulnar collateral and radial collateral ligaments.

The function of the elbow joint is to extend and flex the arm grasp and reach for objects. The range of movement in the elbow is from 0 degrees of elbow extension to 150 of elbow flexion. Muscles contributing to function are all flexion (biceps brachii, brachialis, and brachioradialis) and extension muscles (triceps and anconeus).

In humans, the main task of the elbow is to properly place the hand in space by shortening and lengthening the upper limb. While the superior radioulnar joint shares joint capsule with the elbow joint, it plays no functional role at the elbow.

With the elbow extended, the long axis of the humerus and that of the ulna coincide. At the same time, the articular surfaces on both bones are located in front of those axes and deviate from them at an angle of 45°. Additionally, the forearm muscles that originate at the elbow are grouped at the sides of the joint in order not to interfere with its movement. The wide angle of flexion at the elbow made possible by this arrangement — almost 180° — allows the bones to be brought almost in parallel to each other. 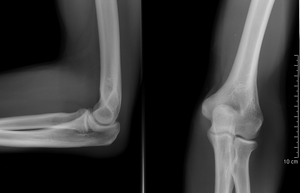 Normal radiograph; right picture of the straightened arm shows the carrying angle of the elbow

When the arm is extended, with the palm facing forward or up, the bones of the upper arm (humerus) and forearm (radius and ulna) are not perfectly aligned. The deviation from a straight line occurs in the direction of the thumb, and is referred to as the "carrying angle" (visible in the right half of the picture, right).

The carrying angle permits the arm to be swung without contacting the hips. Women on average have smaller shoulders and wider hips than men, which tends to produce a larger carrying angle (i.e., larger deviation from a straight line than that in men). There is, however, extensive overlap in the carrying angle between individual men and women, and a sex-bias has not been consistently observed in scientific studies. This could however be attributed to the very small sample sizes in those cited earlier studies. A more recent study based on a sample size of 333 individuals from both sexes concluded that carrying angle is a suitable secondary sexual characteristic.

The angle is greater in the dominant limb than the non-dominant limb of both sexes, suggesting that natural forces acting on the elbow modify the carrying angle. Developmental, aging and possibly racial influences add further to the variability of this parameter.

Though the elbow is similarly adapted for stability through a wide range of pronation-supination and flexion-extension in all apes, there are some minor differences. In arboreal apes such as orangutans, the large forearm muscles originating on the epicondyles of the humerus generate significant transverse forces on the elbow joint. The structure to resist these forces is a pronounced keel on the trochlear notch on the ulna, which is more flattened in, for example, humans and gorillas. In knuckle-walkers, on the other hand, the elbow has to deal with large vertical loads passing through extended forearms and the joint is therefore more expanded to provide larger articular surfaces perpendicular to those forces.

Derived traits in catarrhini (apes and Old World monkeys) elbows include the loss of the entepicondylar foramen (a hole in the distal humerus), a non-translatory (rotation-only) humeroulnar joint, and a more robust ulna with a shortened trochlear notch.

The proximal radioulnar joint is similarly derived in higher primates in the location and shape of the radial notch on the ulna; the primitive form being represented by New World monkeys, such as the howler monkey, and by fossil catarrhines, such as Aegyptopithecus. In these taxa, the oval head of the radius lies in front of the ulnar shaft so that the former overlaps the latter by half its width. With this forearm configuration, the ulna supports the radius and maximum stability is achieved when the forearm is fully pronated.

All content from Kiddle encyclopedia articles (including the article images and facts) can be freely used under Attribution-ShareAlike license, unless stated otherwise. Cite this article:
Elbow Facts for Kids. Kiddle Encyclopedia.