The triceps brachii muscle is a muscle on the back of the upper arm. There are three parts that each come from different places at the top of the arm and join together at the elbow. It straightens the arm. The name is Latin for "three-headed muscle in the arm".

The triceps brachii has three heads. They are: the long head, medial (inside) head, and the lateral (outside) head.The long head comes from the shoulderblade. It goes down the arm between teres minor muscle and teres major muscle. 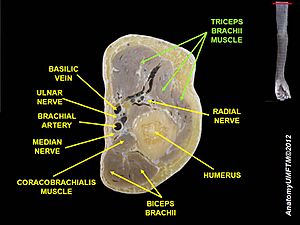 The medial head and lateral heads comes from the humerus (upper arm bone).

The fibers join to a single tendon to attach to the ulna bone. Some research found that there might be more than one tendon.

The triceps straightens the elbow pulls against the biceps and brachialis muscles. It can also hold the elbow in place when the forearm and hand are used for small movements, like writing.The long head might be used when the same force is needed for a long time, or to help control shoulder and elbow movement. The lateral head is used when a lot of force is needed at once, while the medial part is used for more careful movement. 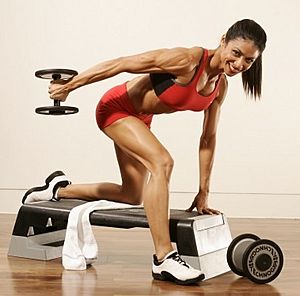 The triceps can be trained by itself or together with other muscles by straightening the elbow or keeping it straight while holding something.

The plural of triceps used to be tricipites, but now people usually say triceps to mean both singular and plural.

Many mammals, like dogs, cows, and pigs, have a fourth triceps head, called the accessory head. It is between the lateral and medial heads.

All content from Kiddle encyclopedia articles (including the article images and facts) can be freely used under Attribution-ShareAlike license, unless stated otherwise. Cite this article:
Triceps brachii muscle Facts for Kids. Kiddle Encyclopedia.