Tamarins live in small family groups. They are diurnal (most active during the day); at night, they rest in the cavity of a tree. The life span is about 15 years. They are in danger of extinction due to loss of habitat as their forest home is being cleared. These tamarins are arboreal (they live in trees). They live in coastal tropical rainforests in eastern Brazil of South America. 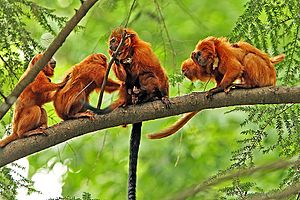 As its name would suggest, this lion tamarin is a reddish orange to golden brown in color. Its hair is longer and darker around the face, forming a mane on top of the head and on the cheeks and throat. Its limbs are slender yet capable with sharp claw-like nails (called tegulae), befitting its strictly arboreal life. Although quite long, its tail is not prehensile. The tail and forepaws of this monkey may have a black coloration. Its body may be up to 335 millimetres (13.2 in) long and its tail up to 400(16 in). The male reaches a maximum weight of just 700 grams (25 oz) in the wild though higher weights can be found in captivity. The pregnant female may weigh up to 790 grams (28 oz) but a non-gestating female typically weighs closer to 550 grams (19 oz).

The golden lion tamarin is an omnivore (eating both animals and plants); it eats insects, fruit, small snakes, lizards, snails, spiders, and vegetables. Tamarins use their claws to dig for insects in the bark of trees. 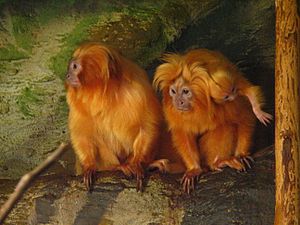 The Golden Lion Tamarin is diurnal and primarily arboreal, forming small groups of patrols a consistent territory of around 400,000 square metres (100 acres); fighting between groups is avoided by scent marking and "ritual encounters". By night, the tamarins sleep in abandoned nesting holes in trees, or in large bromeliads.

The group is cooperative in the rearing of young; however, only the dominant female usually breeds. The males are responsible for the bulk of rearing duties, with the mother nursing and providing transportation for the infant during its first week of life. Resources are shared among the group, as are predator surveillance duties. The young are well cared for until adolescence. Unlike other primates, both males and females leave the group.

Fully mature at 56-75 days, the Golden Lion Tamarin is able to breed at 18 months of age. The breeding season is from September to March. Gestation lasts for 126-136 days, usually ending in twin births; there may be up to two litters annually. The young tamarins are weaned after just 90 days; less than half of infants survive their first year of life. If they do, a lifespan of about 8 years can be expected. The oldest recorded tamarin died at the age of 31 at the San Antonio Zoo (TX) in 1999. 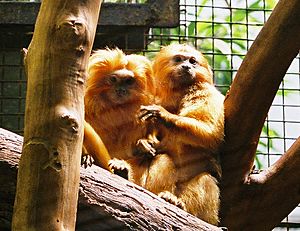 Most of the wild population is confined to the Poço das Antas Biological Reserve, a protected area of swampy forests in the state of Rio de Janeiro. It is an important bastion of the Golden Lion Tamarin, as only 2% of forests in the monkey's original range remains. Furthermore, its existing habitat has been broken up by logging and agriculture; this has led to isolated populations and inbreeding, a combination likely to result in extinction.

A high canopy with dense tangles of vines is required by the Golden Lion Tamarin; other than providing a home, the labyrinthine forest affords some degree of protection from its many predators. Its main predators are raptors, large cats and snakes. The canopy also provides an important source of food; the omnivorous lion tamarins rely on rainwater and insects concentrated in the reservoirs of bromeliads and other small animals inhabiting the bark of trees. Fruit is also consumed; for instance at União Biological Reserve, more than 160 species of fruit were observed being eaten.

All content from Kiddle encyclopedia articles (including the article images and facts) can be freely used under Attribution-ShareAlike license, unless stated otherwise. Cite this article:
Golden lion tamarin Facts for Kids. Kiddle Encyclopedia.