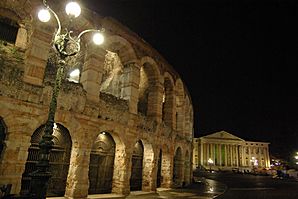 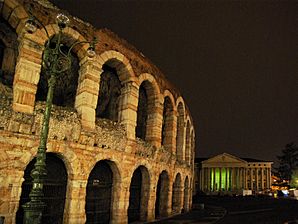 Earth Hour 2013 at the Verona Arena amphitheatre, Piazza Bra, Verona, Italy before (top) and while the street lighting was switched off.

The World Wide Fund for Nature (WWF) is an international environmental organization. It was founded as the World Wildlife Fund, which is still its official name in Canada and the United States.

Most of its offices are in Switzerland. Their mascot, or logo, is the Giant Panda. It is the world's largest independent wildlife management organization. It has over 5 million supporters worldwide, working in more than 90 countries. WWF supports 15,000 conservation and environmental projects around the world. It is a charity. About 90% of its fundraising money is from donations by private individuals and businesses.

The group says its mission is "to halt and reverse the destruction of our natural environment". Much of its work focuses on the conservation of three biomes that contain most of the world's biodiversity: forests, freshwater ecosystems, and oceans and coasts. Among other issues, it is also concerned with endangered species, pollution and climate change. The organization runs more than 1,200 field projects worldwide each year.

All content from Kiddle encyclopedia articles (including the article images and facts) can be freely used under Attribution-ShareAlike license, unless stated otherwise. Cite this article:
World Wide Fund for Nature Facts for Kids. Kiddle Encyclopedia.