The black-flanked rock-wallaby is a rather wary animal, with black and grey colouration to blend in with its rocky surroundings, later to lighten in colour during summer. It has short, thick, woolly fur that is particularly dense around the base of the tail, rump and flanks. Its long, brushy tail is quite useful for retaining balance as they hop from one rock to another, and the soles of its feet are highly textured to prevent slipping.

This small nocturnal wallaby is found amid rocky outcrops. It is generally greyish-brown with a paler belly and chest, a dark stripe running from its head down its spine, and it has a dark tail and feet.

This wallaby lives in groups of 10–100 individuals. It usually feeds at night in open areas such as grasses, where it can also find fruit, leaves and a variety of herbs. Because most of its water comes from its diet, it rarely drinks and can conserve water by taking refuge from the heat in rocky caves. It is most active when it leaves its shelter at early-evening. Individuals reach sexual maturity at 1–2 years of age, after which time breeding is continuous, depending on rainfall. Females show embryonic diapause; the development of the embryo can cease temporarily until environmental conditions become more suitable for its development to complete. The gestation period lasts around 30 days, and like other young marsupials, the young are poorly developed and suckle inside the mother's pouch until they are ready to leave. Unlike other kangaroos and wallabies, mothers leave their young in a sheltered place while they feed.

Predation by introduced foxes and feral cats, habitat damage caused by sheep, goats and rabbits and alteration of fire regimes have caused the population to decline. Several sites where populations occur are protected, and a recovery plan is underway. Fox control has been established at several sites.

The species was first described by John Gould in 1842. There are at least two subspecies besides the nominate subspecies:

A description published as Petrogale lateralis purpureicollis (purple-necked rock-wallaby) by Le Souef in 1924 is given in some listings, but this is now regarded as a distinct species. The specimens obtained at the MacDonnell Ranges, and from the Western Kimberley, are also distinct enough to be separate subspecies of the black-flanked rock-wallaby. These populations, and the recognised subspecies, are distinguished by chromosomal as well as morphological distinctions. 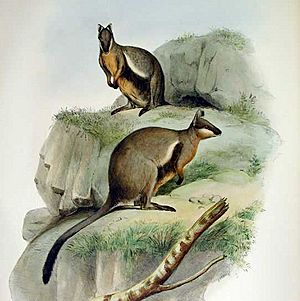 Illustration from Gould's Mammals of Australia, 1863

The Australian Commonwealth Government's Department of Environment and Water Resources lists the black-flanked rock-wallaby as having "Vulnerable" status and cites various habitats in Western Australia. The subspecies found at the Recherche Archipelago was assessed as a vulnerable species in 2006.

The State Government reported that there were just 50 animals left in the wild in South Australia in 2007. In October 2007, 15 wallabies were moved into an open-range zoo which undertakes breeding programs for endangered species, Monarto Zoo. The animals came from the Pukatja/Ernabella area and another undisclosed location in the Anangu Pitjantjatjara Yankunytjatjara (APY) Lands. Work to monitor the species' survival was said to involve Aboriginal trackers and schoolchildren from Pukatja to help track the wallabies' movements.

Previously widespread throughout the ranges of central Australia, the warru is as of July 2019[update] South Australia's most endangered mammal, primarily due to predation by foxes and feral cats. However Monarto has had some success in breeding the wallabies, and has helped to establish a viable population (22) of the wallabies in a 1 square kilometre (0.39 sq mi) fenced area, known as the Pintji, in the APY lands. In June 2017 Monarto announced that 25 of the population bred at Pintji, along with 15 others, had been released into the wild. These will be monitored and feral animal control measures are in place.

All content from Kiddle encyclopedia articles (including the article images and facts) can be freely used under Attribution-ShareAlike license, unless stated otherwise. Cite this article:
Black-flanked rock-wallaby Facts for Kids. Kiddle Encyclopedia.