The zoo features several unique attractions, including opportunities to get close to lions and cheetahs, and have interactive experiences with meerkats, a Southern White Rhinoceros and a Black Rhinoceros, and see Australia's largest giraffe herd. 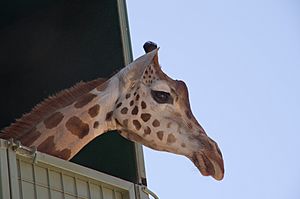 Asali was transported from Perth to the zoo in September 2015

The zoo was created in 1983 on land owned by the state government as a closed-to-the-public, purpose breeding area and endangered species sanctuary. In 1990, a study was undertaken to determine the feasibility of allowing public access to the zoo, and by 1993 it had been developed into a large educational facility, open to the public, with bus and walking tours.

Five major habitat exhibits have been developed, including the Asian steppes, arid north Africa, African plains, and Asian grasslands. The entire zoo is surrounded with vermin-proof fencing to keep the habitat as self-contained as possible. The area is not irrigated, and is populated primarily with native flora to cut down on water consumption and erosion in the semi-arid region. The roads and trails within the zoo are constructed of local materials to keep them low maintenance, and to allow them to be easily re-integrated into the habitat should the need arise. Waste water is recycled, and as much as possible, solar power is used for electric fencing needs.

In late 2019, Monarto Zoo began a three-year project to convert itself into a safari park with luxury resort facilities. As part of the overhaul, it is transitioning its branding to be "Monarto Safari Park" by 2021. Monarto will also become the largest park outside of Africa. 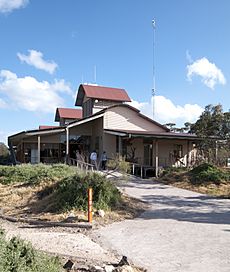 Visitors centre at the site

The zoo is taking part in numerous conservation efforts with endangered species, and has breeding projects for many Australian native species, including the greater bilby, the tammar wallaby, the yellow-footed rock-wallaby, and the eastern barred bandicoot, as well as many exotic species, including the scimitar oryx, Przewalski's horse, American bison, the addax, Barbary sheep, South African cheetah, southern white rhinoceros, black rhinoceros and the African wild dog.

In 2006, the zoo began a breeding program for Tasmanian devils which are free of facial tumour disease.

Previously widespread throughout the ranges of central Australia, the warru, or black-footed rock-wallaby, is as of July 2019[update] South Australia's most endangered mammal, primarily due to predation by foxes and feral cats. However Monarto has had some success in breeding the wallabies since the capture of 15 of them in 2007, and has helped to establish a viable population (22) of the wallabies in a 1 square kilometre (0.39 sq mi) fenced area, known as the Pintji, in the Anangu Pitjantjatjara Yankunytjatjara (APY) Lands lands. In June 2017 Monarto announced that 25 of the population bred at Pintji, along with 15 others, had been released into the wild. These will be monitored and feral animal control measures are in place.

On-site shops and catering facilities at the zoo actively avoid using products containing palm oil. Visitors are encouraged to go palm oil free and provided information on how to go about it.

All content from Kiddle encyclopedia articles (including the article images and facts) can be freely used under Attribution-ShareAlike license, unless stated otherwise. Cite this article:
Monarto Safari Park Facts for Kids. Kiddle Encyclopedia.