At the equator, the Sun provides approximately 1000 watts per square meter on Earth's surface. 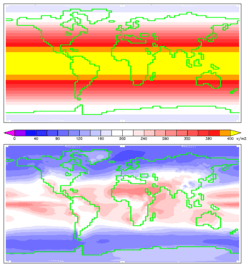 The top diagram shows how the strength of sunlight is less nearer the Earth's poles. The lower map shows how much solar energy hits the Earth's surface after clouds and dust have reflected and absorbed some solar energy.

Solar energy is the energy that is in sunlight. It has been used for thousands of years in many different ways by people all over the world. As well as its traditional human uses in heating, cooking, and drying, it is used today to make electricity where other power supplies are absent, such as in remote places and in space. It is becoming cheaper to make electricity from solar energy and in many situations it is now competitive with energy from coal or oil. A solar cooker can be used for cooking food. Solar energy is also called "Heat Trapper" as it is the automatic, non-mechanical, sun ray trapper. This Sun trapper like devices were used by soldiers during WWII for heat requirements in the army and enemy directions.

Solar energy is used today in a number of ways:

Energy from the Sun

After passing through the Earth's atmosphere, most of the Sun's energy is in the form of visible light and infrared light radiation. Plants convert the energy in sunlight into chemical energy (sugars and starches) through the process of photosynthesis. Humans regularly use this store of energy in various ways, as when they burn wood or fossil fuels, or when simply eating plants, fish and animals.

Solar radiation reaches the Earth's upper Earth's atmosphere with the power of 1366 watts per square meter (W/m2). Since the Earth is round, the surface nearer its poles is angled away from the Sun and receives much less solar energy than the surface nearer the equator.

At present, solar cell panels convert, at best, about 15% of sunlight hitting them into electricity. The dark disks in the third diagram on the right are imaginary examples of the amount of land that, if covered with 8% efficient solar panels, would produce slightly more energy in the form of electricity than the world needed in 2003. 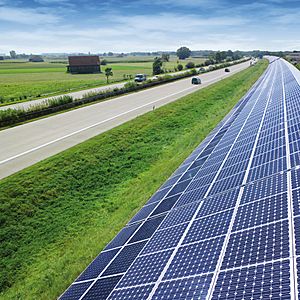 Many technologies have been developed to make use of solar radiation. Some of these technologies make direct use of the solar energy (e.g. to provide light, heat, etc.), while others produce electricity. 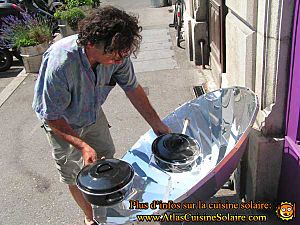 Solar cooking uses the Sun as the source of energy instead of standard cooking fuels such as charcoal, coal or gas. Solar cookers are an inexpensive and environmentally sound alternative to traditional ovens. They are becoming widely used in areas of the developing world where deforestation is an issue, financial resources to purchase fuel are limited, and where open flames would pose a serious risk to people and the environment 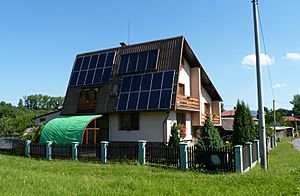 House with solar panels for heating and other needs in Jablunkov, Czech Republic.

The Sun may be used to heat water instead of electricity or gas. There are two basic types of active solar heating systems based on the type of fluid — either liquid or air — that is heated in the solar energy collectors. (The collector is the device in which a fluid is heated by the Sun.) 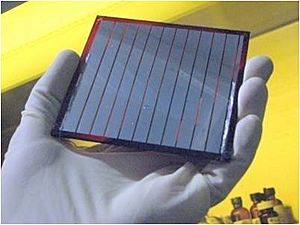 Solar cells can be used to generate electricity from sunlight. It is a device that converts light energy into electrical energy. Sometimes the term solar cell is reserved for devices intended specifically to capture energy from sunlight, while the term photovoltaic cell is used when the light source is unspecified.

Solar cells have many applications. They have long been used in situations where electrical power from the grid is unavailable, such as in remote area power systems, Earth-orbiting satellites and space probes, consumer systems, e.g. handheld calculators or wrist watches, remote radiotelephones and water pumping applications.

All content from Kiddle encyclopedia articles (including the article images and facts) can be freely used under Attribution-ShareAlike license, unless stated otherwise. Cite this article:
Solar energy Facts for Kids. Kiddle Encyclopedia.