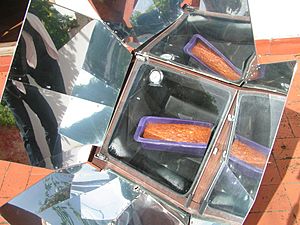 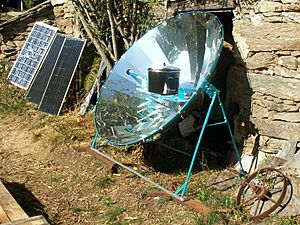 A solar cooker is a device that uses energy from sunlight. They use no fuel and cost nothing to run. They also help slow deforestation and desertification. Another benefit of solar cooking is that unlike cooking with fire, Solar cookers don't pollute the air. Solar cookers are also sometimes used for cooking outside, especially when using fire is risky or there is no fuel. The solar cooker is very useful. It is a renewable source of energy

Solar box cookers can be made of materials or be manufactured in a factory for sale. There are many kinds of solar box cookers, from small cardboard boxes, that can be used to cook a single meal, to wood and glass boxes built into the sunny side of a house. Although the solar cooker was invented by Horace de Saussure, a Swiss naturalist, as early as 1767, solar box cookers have only become popular since the 1970s. They are found in almost every country of the world.

All content from Kiddle encyclopedia articles (including the article images and facts) can be freely used under Attribution-ShareAlike license, unless stated otherwise. Cite this article:
Solar cooker Facts for Kids. Kiddle Encyclopedia.