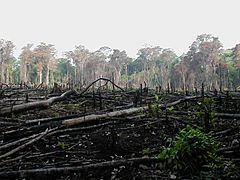 Deforestation is when forests are destroyed by cutting trees (logging) and not replanting them. The most common reason is to clear the land to make farms and ranches. They also cut trees for firewood and lumber and to make room for cities.

Deforestation destroys the habitat of many animals, leading to their death and possible extinction. The loss is more severe in so called primary forests, which are forests that have yet been untouched by humans. Deforestation also releases sequestered carbon.

Land has other uses besides growing trees. The biggest uses of land that was once forested are for farming and ranching. Some land is also used for roads and buildings, especially in urban areas. As the population grows, people need to remove more trees. They also use the wood from the trees as lumber to make buildings and other things, or they burn the trees as firewood.

Forests have the following functions:

Forests are often planted to protect against natural disasters. When forests are lost, very often the soil they protected is also lost. This loss of soil is called erosion.

In 2020, a team of scientists studied worldwide deforestation efforts and found they were not working. They said the idea of everyone working toward the same goal had to change because different groups of people had different reasons for cutting down forests.

All content from Kiddle encyclopedia articles (including the article images and facts) can be freely used under Attribution-ShareAlike license, unless stated otherwise. Cite this article:
Deforestation Facts for Kids. Kiddle Encyclopedia.