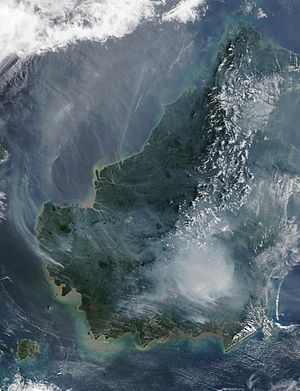 Satellite image of the island of Borneo on 19 August 2002, showing smoke from burning peat swamp forests

Peat swamp forests are forest wetlands in tropical and subtropical areas. They have poor drainage. Waterlogged soil prevents dead leaves and wood from decomposing fully. Over time, this creates a thick layer of acidic peat. They are made up of trees which are broadleaved (not conifers), and many other types of flowering plants.

Peat swamp forests are usually surrounded by lowland rain forests on better-drained soils. There may be brackish or salt-water mangrove forests near the coast. 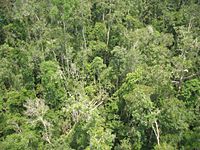 About 62% of the world’s tropical peat lands occur in southeast Asia. In this area 80% is in Indonesia, 11% in Malaysia, 6% in Papua New Guinea, with pockets in Brunei, Vietnam, the Philippines, and Thailand. They have trees up to 70 m high. The spongy, unstable, waterlogged, anaerobic beds of peat can be up to 20 m deep with low pH (pH 2.9 – 4) and low nutrients. The forest floor is seasonally flooded. The water is stained dark brown by the tannins that leach from the fallen leaves and peat – hence the name ‘blackwater swamps’. During the dry season, the peat remains waterlogged and pools lie among the trees.

Tropical peatlands coexist with swamp forests in these tropical and subtropical moist broadleaf forests. In this biome vast amounts of carbon as soil organic matter store up – much more than natural forests contain. They are among the largest near-surface reserves of terrestrial organic carbon. Unfortunately, regardless of their importance, peat swamp forests are one of the most threatened, yet least studied and most poorly understood biotypes.

Large areas of these forests are being logged at high rates. Since the 1970s, peat swamp forest deforestation and drainage have increased greatly. In addition, El Niño and Southern Oscillation (ENSO) drought and large-scale fires are accelerating peatland devastation. This destruction increass the carbon release to the atmosphere as carbon dioxide. Tropical peatlands have already become a large CO2 source, but data is limited.

Tropical peat swamp forests are home to thousands of animals and plants, including many rare and critically endangered species such as the orangutan and Sumatran tiger, whose habitats are threatened by peatland deforestation.

All content from Kiddle encyclopedia articles (including the article images and facts) can be freely used under Attribution-ShareAlike license, unless stated otherwise. Cite this article:
Peat swamp forest Facts for Kids. Kiddle Encyclopedia.