The Sumatran tiger (Panthera tigris sumatrae) is the smallest tiger subspecies. It is listed as critically endangered. They are in danger due to hunting and the destruction of their habitat. It is estimated that there are only about 400-700 Sumatran tigers left in the wild.

The Sumatran tiger lives only on the Indonesian island of Sumatra. It can be found in low and highland areas, mountainous jungles, and peat swamp forests.

A Sumatran tiger in Melbourne Zoo 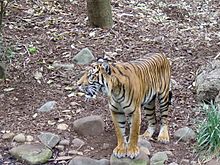 Sumatran tigers ambush their prey, using their long, powerful legs, jaws, and claws to catch and kill their prey. They have extremely good eyesight and hearing, which helps them to find their prey. Sumatran tigers feed mainly on wild boar and deer, and they can eat more than 40 pounds of meat at a time. 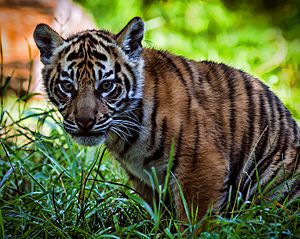 They give birth to around 2-3 cubs at a time, but they can sometimes give birth to six cubs. The cubs’ eyes are closed at birth, and they don’t open fully until the cub is one or two weeks old. Cubs feed on milk for three to six months and start hunting with their mother at the age of about five or six months.

They will stay with their mother until they are fully able to hunt on their own, which doesn’t happen until the cubs are at least 18 months to 2 years old. In the wild, Sumatran tigers live an average of 15 years.

All content from Kiddle encyclopedia articles (including the article images and facts) can be freely used under Attribution-ShareAlike license, unless stated otherwise. Cite this article:
Sumatran tiger Facts for Kids. Kiddle Encyclopedia.