Melbourne Zoo is a zoo in Melbourne, Australia. It is located within Royal Park in Parkville, approximately 4 kilometres (2.5 mi) north of the centre of Melbourne. It is the primary zoo serving Melbourne. The zoo contains more than 320 animal species from Australia and around the world, and is accessible via Royal Park station on the Upfield railway line, and is also accessible via tram routes 58 and 19, as well as by bicycle on the Capital City Trail. Bicycles are not allowed inside the zoo itself.

Melbourne Zoo is Australia's oldest zoo and was modelled on London Zoo. The zoo was opened on 6 October 1862 at the Royal Park site of 55-acre (22 ha) on land donated by the City of Melbourne. Before this, animals were housed at the botanical gardens in Melbourne.

Initially the zoo was important for the acclimatisation of domestic animals recovering from their long trip to Australia. It was only with the appointment of Albert Alexander Cochrane Le Souef in 1870 that more exotic animals were procured for public display, and the gardens and picnic areas were developed. 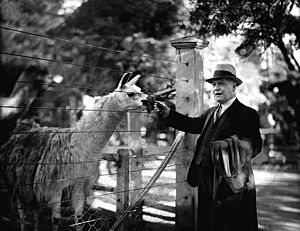 The President of the Zoological Board, feeding a llama in 1937 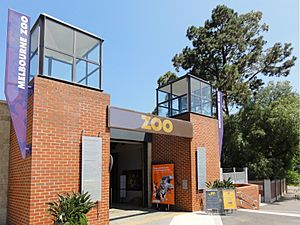 The Rail Gate entrance, at the north of the zoo near to Royal Park railway station

Visitors can see historical cages including the heritage listed Elephant House, which has been renovated and adapted for use for customers paying to sleep overnight in tents at the zoo in popular Roar and Snore evenings. These evenings allow the public to see some of the nocturnal animals at the zoo in evening guided tours by experienced camp hosts. One of the most famous exhibits was Queenie the elephant.

The zoo is set among flower gardens and picnic areas. Many of the animals are now organised in bioclimatic zones: African rainforest featuring gorillas, mandrills, pigmy hippos and parrots; Asian Rainforest with tigers and otters; and the Australian bush with koala, kangaroos, emu, echidnas and endangered hairy nose wombats. Popular exhibits also include the Butterfly House, the great flight aviary and the Trail of the Elephants. Melbourne Zoo most recently completed construction and opened their carnivores trail in early 2018.

The Zoos Victoria administers the Melbourne Zoo, as well as the Werribee Open Range Zoo which features herbivorous creatures in an open range setting; and Healesville Sanctuary on 175 hectares (430 acres) of bushland exhibiting Australian fauna.

Melbourne Zoo commemorated 150 years of operation in 2012 and this was celebrated in an Australian Zoos collector's edition of stamps released by Australia Post in September 2012. 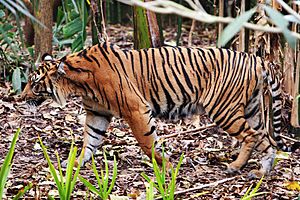 Sumatran tiger at the Melbourne Zoo

All content from Kiddle encyclopedia articles (including the article images and facts) can be freely used under Attribution-ShareAlike license, unless stated otherwise. Cite this article:
Melbourne Zoo Facts for Kids. Kiddle Encyclopedia.