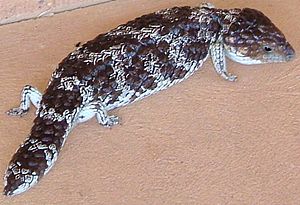 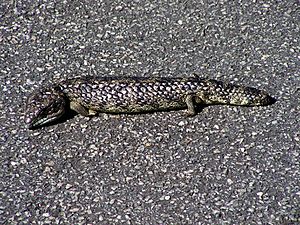 The shingleback lizard (Tiliqua rugosa) is a short-tailed, slow-moving species of blue-tongued skink found in Australia. Three of the four recognised subspecies are found only in Western Australia, where they are known collectively by the common name bobtail. The name shingleback is also used, especially for T. rugosa asper, the only subspecies native to eastern Australia.

Apart from bobtail and shingleback, a variety of other common names are used in different states, including stumpy-tailed skink, bogeye or boggi, pinecone lizard and sleepy lizard. Aboriginal names include Yoorn in the Nyungar language.

Tiliqua rugosa has a heavily armoured body and can be found in various colours, ranging from dark brown to cream. It has a short, wide, stumpy tail that resembles its head and may confuse predators. The tail also contains fat reserves, which are drawn upon during brumation in winter. This skink is an omnivore; it eats snails and plants and spends much of its time browsing through vegetation for food. It is often seen sunning on roadsides or other paved areas.

The species was first described by John Edward Gray in 1825 as Trachydosaurus rugosus. It is now classified as Tiliqua rugosa. Some herpetologists claim this species has more common names than any other lizard.

The species is widely distributed in arid to semiarid regions of southern and western Australia. The range extends from Shark Bay, Western Australia, across the southernmost regions of the country to the coast, then north into Queensland. Four subspecies are found in Western Australia, including one at Rottnest Island. It also occurs in the eastern states of Victoria and New South Wales, but does not reach coastal areas.

The habitat of the species includes shrublands and desert grasslands to sandy dunes. These skinks are well known, due to a preference for sun basking in open areas, and are often seen along roadsides or other cleared areas in its range. On average, individuals have a home range of four hectares, and can move up to 500 metres per day. 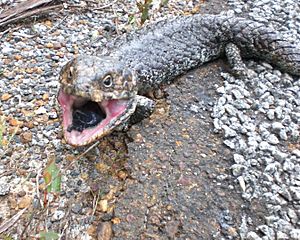 Tiliqua rugosa has a heavily armoured body and can be found in various colours, ranging from dark brown to cream. Its snout–vent length varies from 260 to 310 mm (10 to 12 in), but it is a very heavy-bodied lizard for its length. 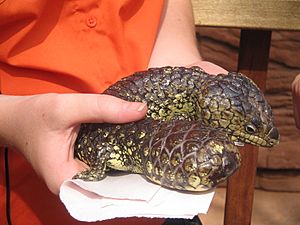 It has a triangular head and a bright blue tongue. Its short, stumpy tail is similar in shape to its head. This possibly evolved as a defence mechanism against predators, and has led to the common name of "two-headed skink". Its short tail also contains fat reserves, which the lizard lives upon during brumation in winter. Unlike many skinks, shinglebacks do not exhibit autotomy and cannot shed their tails.

Individuals are known to live for 50 years in the wild. 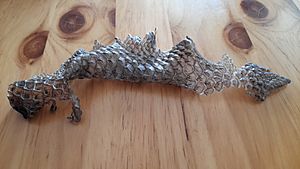 Tiliqua rugosa normally shed their skin as a whole ensemble, including the eye covering. This takes up to several hours, during which the lizard rubs against objects to help the process. 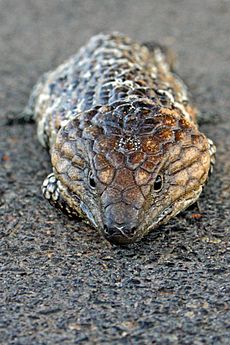 Tiliqua rugosa is an omnivore that eat snails, insects, carrion, vegetation and flowers. The species was once preyed upon by dingos, Australian pythons such as Morelia spilota, and local peoples; a threat is now more likely to come from large, introduced feral species, such as foxes and cats.

They have also been known to eat human food, such as sausage and chicken, as well as fruits such as strawberries, banana and passionfruit.

The shingleback skink has become a popular pet among Australian enthusiasts. They are relatively docile and easy to feed and maintain. A permit may be required to keep them in some areas. 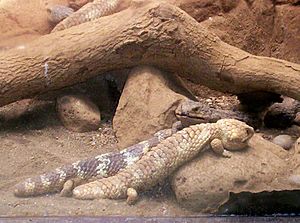 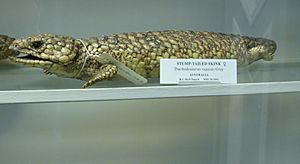 T. rugosa is a viviparous skink, giving birth to broods of one to four relatively large offspring. Unlike most lizards, the species tends to be monogamous extending outside the breeding season of September through November; such pairs have been known to return to each other every year for up to 20 years.

When they are born, the young immediately consume their afterbirth. They stay with their parents for several months before moving on, but they remain in close proximity, forming a colony of closely related skinks.

The male of a monogamous pair eats less while parenting, remaining alert and ready to give an alarm.

Their hearing can be measured at the round window as cochlear microphonics and summating potential (of the cochlea), and compound action potential and single-fibre responses (of the auditory nerve).[jargon] These indicate a best hearing range near 1000 Hz. Earlier reports that their hearing sensitivity varied with the season have been shown to be an artefact of the seasonally varying sensitivity to anesthetics.

Single-unit recordings from the auditory nerve show both spontaneous and nonspontaneous responses. Tuning curves show peak sensitivity between 200 Hz and 4.5 kHz. The absolute sensitivity is quite high, with some thresholds at 6 db sound pressure level, very close to human best sensitivity.

All content from Kiddle encyclopedia articles (including the article images and facts) can be freely used under Attribution-ShareAlike license, unless stated otherwise. Cite this article:
Tiliqua rugosa Facts for Kids. Kiddle Encyclopedia.