Indigenous Australians, also known as Australian Aborigines, are the native people of Australia. Indigenous Australians used weapons like boomerangs to kill animals for food. They came to Australia around 50,000 years ago. Many of them suffered when Europeans from Britain arrived in Australia, because of disease and the loss of their hunting lands. Aborigines also have their own type of art.

The first people of Australia were nomadic people who came to Australia from southeast Asia. Scientists do not know exactly when they arrived but it is at least 50,000 years ago. They travelled through the bush, hunting with spears and boomerangs (throwing sticks) and searching for food such as plants, grubs, and insects, and hunting for animals. They had few possessions and made everything they needed. This way of life does not change or harm the fragile environment of Australia. The well-being of the land, and its plants and animals are vital and sacred to the aboriginal people. Aborigines have a unique way of telling thier history. They use songs and stories that are passed from generation to generation. 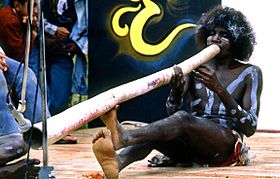 When the British came to Australia in 1788, they called these native people “aboriginals”, meaning people who had lived there since the earliest times. The British took land and many Aborigines died. They were either killed or died from diseases.

Today there are about 517,000 Aborigines in Australia. Most live in cities, but a few thousand still try to follow a traditional way of life.

Aboriginal Australians believe that they have animal, plant, and human ancestors who created the world and everything in it. This process of creation is called Dreamtime. There are many songs and stories about Dreamtime, which generations of aboriginal people have passed down to their children. Say someone dies they get a new life as a plant or another person. 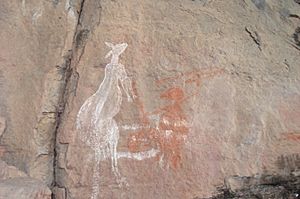 The art of the Indigenous Australians is mostly about dreamtime and is made as part of the ceremonies celebrating Dreamtime. Paintings of the people, spirits, and animals of Dreamtime cover sacred cliffs and rocks in tribal territories. Some of the pictures are made in red and yellow ochre and white clay, others have been carved into the rocks. Many are thousands of years old. 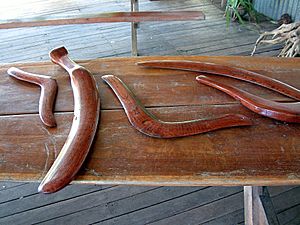 Most aboriginal Australian live in cities & towns. Some have benefitted from government education and aid programmes and have careers as teachers, doctors and lawyers. Many, though, are poor and isolated from white society. They have lost touch with traditional aboriginal tribal ways, and because they do not fit neatly into white Australian society, they cannot share its benefits.

When British people came to live in Australia, they decided that the land was empty, that nobody "owned" the land, in the way Europeans defined that word. This was called "Terra nullius", Latin words for "empty land". Under British law, all land belongs to the king, who is then able to sell it to other people.

In 1976, the Australian government agreed that aboriginal people have rights to the land where their tribes were originally located and gained the right to use the land. On 3 June, 1992, the High Court of Australia said that the idea of "Terra nullius" was wrong, and the government brought in new laws, to set up Native Title. If aborigines can prove they have always used particular land, it has not been sold, or changed by government acts, then the land could be claimed as aboriginal land.

All content from Kiddle encyclopedia articles (including the article images and facts) can be freely used under Attribution-ShareAlike license, unless stated otherwise. Cite this article:
Indigenous Australians Facts for Kids. Kiddle Encyclopedia.