The Djabugay language group's mythical being, Damarri, changed into a mountain range. He is seen lying on his back above the Barron River Gorge, looking up to the sky.

Australian Aboriginal myths, also known as Dreamtime stories and Songlines, are the stories traditionally performed and told by the indigenous people of Australia. Each of the language groups across Australia has its own stories.

All the myths explain important features and meanings within each Aboriginal group's local landscape. They give cultural meaning to the Australian physical landscape. People who know these stories have access to the wisdom and knowledge of Australian Aboriginal ancestors back beyond the reach of memory.

David Horton wrote in the Encyclopaedia of Aboriginal Australia that:

"A mythic map of Australia would show thousands of characters, varying in their importance, but all in some way connected with the land. Some emerged at their specific sites and stayed spiritually in that vicinity. Others came from somewhere else and went somewhere else."

"Many were shape changing, transformed from or into human beings or natural species, or into natural features such as rocks but all left something of their spiritual essence at the places noted in their stories."

Australian Aboriginal myths have been described as parts of a catechism, a liturgical manual, a history of civilization, a geography textbook, and to a much smaller extent a manual of the world and the universe.

An Australian linguist, R. M. W. Dixon, collected many Aboriginal myths in their original languages. He discovered some landscape details in myths were the same as scientific discoveries being made about the same landscapes. For example, on the Atherton Tableland, myths tell of the origins of Lake Eacham, Lake Barrine, and Lake Euramo. Geologists have dated the volcanic explosions which formed the lakes, and were described by Aboriginal myth tellers, as having happened more than 10,000 years ago. Pollen fossil sampling from the bottom of the craters agrees with the Aboriginal myth-tellers' story. When the craters were formed, the area was eucalyptus forest, not the current wet tropical rain forests.

Dixon said that Aboriginal myths about the origin of the Crater Lakes might be accurate back to 10 000 years ago. Further investigation by the Australian Heritage Commission led to the Crater Lakes myth being listed on the Register of the National Estate, and included within Australia's World Heritage nomination of the wet tropical forests. It is an "unparalleled human record of events dating back to the Pleistocene era."

Since then, Dixon has found many similar examples of Australian Aboriginal myths that accurately describe landscapes of an ancient past. He particularly noted many myths telling of previous sea levels, including:

There are at least 400 Aboriginal groups across Australia. Each group has its own name, its own language and often their own dialects. Each group had its own myths, and the words and names of individual myths come these language groups.

With so many different Aboriginal groups, languages, beliefs and practices, it is not possible to describe under a single heading, the full range and diversity of all myths across the entire continent.

The similarity in Aboriginal myths and mythology includes:

"..they generally describe the journeys of ancestral beings, often giant animals or people, over what began as a featureless domain. Mountains, rivers, waterholes, animal and plant species, and other natural and cultural resources came into being as a result of events which took place during these Dreamtime journeys. Their existence in present-day landscapes is seen by many indigenous peoples as confirmation of their creation beliefs.."

"..The routes taken by the Creator Beings in their Dreamtime journeys across land and sea.. link many sacred sites together in a web of Dreamtime tracks criss-crossing the country. Dreaming tracks can run for hundreds, even thousands of kilometres, from desert to the coast [and] may be shared by peoples in countries through which the tracks pass.."

Australian anthropologists describe Aboriginal myths still being performed across Australia by Aboriginal peoples as having an important social function. The myths explain the order of their daily lives; helping shape peoples' ideas; and assisting to influence others' behaviour. Also the performance often adds and "mythologises" historical events in the service of these social purposes in a rapidly changing modern world. As R.M. W. Dixon writes:

"It is always integral and common.. that the Law (Aboriginal law) is something derived from ancestral peoples or Dreamings and is passed down the generations in a continuous line. While...entitlements of particular human beings may come and go, the underlying relationships between foundational Dreamings and certain landscapes are theoretically eternal...the entitlements of people to places are usually regarded strongest when those people enjoy a relationship of identity with one or more Dreamings of that place.

This is a central strong feature of Aboriginal identity. It is more than just a matter of believing. The Dreaming existed, and continues to exist, while humans are only temporary.

Aboriginal myths across Australia are a kind of unwritten (oral) library. From this library, Aboriginal people learn about the world and see an Aboriginal 'reality' with concepts and values vastly different from those of western societies:

"Aboriginal people learned from their stories that a society must not be human-centred but rather land centred, otherwise they forget their source and purpose....they are interconnected with the rest of creation, that they as individuals are only temporal in time, and past and future generations must be included in their perception of their purpose in life."

"People come and go but the Land, and stories about the Land, stay. This is a wisdom that takes lifetimes of listening, observing and experiencing...There is a deep understanding of human nature and the environment...sites hold 'feelings' which cannot be described in physical terms...subtle feelings that resonate through the bodies of these people.. It is only when talking and being with these people that these 'feelings' can truly be appreciated. This is.. the intangible reality of these people.." 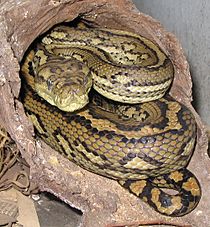 In 1926 a British anthropologist, Professor Alfred Radcliffe-Brown, noted many Aboriginal groups across Australia shared versions of a single myth. The myth told of a powerful, creative, dangerous snake or serpent, usually of enormous size. This serpent was linked with rainbows, rain, rivers, and deep waterholes.

This 'Rainbow Serpent', a snake of enormous size, lives in the deepest waterholes. It came from a larger being which can be seen as a dark streak in the Milky Way. It shows itself to people in this world as a rainbow as it moves through water and rain, shaping landscapes, naming and singing of places, swallowing and sometimes drowning people; strengthening the knowledgeable with rainmaking and healing powers; blighting others with sores, weakness, illness, and death. 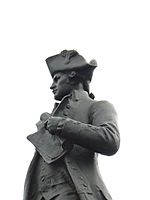 Another myth found across Australia is about a person who arrives from the sea. This person, usually from England, either offers gifts or brings great harm. The person is most often called 'Captain Cook', and portrayed as a villain.

The Aboriginal myths about 'Captain Cook' are not oral history. They are not part of James Cook's exploration of the east coast of Australia in 1770. Aboriginal people did meet with Cook, especially during his seven-week stay on the Endeavour River. The Guugu Yimidhirr people may remember these meetings.

The Australia wide Captain Cook myth, however, tells of a symbolic British character who arrives from across the oceans sometime after the Aboriginal world was formed and the original social order founded. This Captain Cook signals dramatic changes in the social order, into which present-day Aborigines have been born.

In 1988 Australian anthropologist Kenneth Maddock examined several versions of this 'Captain Cook' myth as recorded from a number of Aboriginal groups around Australia:

"set up the people [cattle industry] to go down the countryside and shoot people down, just like animal, they left them lying there for the hawks and crows...So a lot of old people and young people were struck by the head with the end of a gun and left there. They wanted to get the people wiped out because Europeans in Queensland had to run their stock: horses and cattle."

The Murrinh-Patha people live in the saltwater country inland from the town of Wadeye. They describe a Dreamtime in their myths which anthropologists believe is a religious belief but different from most of the world's other religious beliefs.

The Murrinh-patha have a oneness of thought, belief, and expression without equal in Christianity. They see all parts of their lives, thoughts and culture as being influenced by their Dreaming. They do not see a difference between spiritual or material things. There is no difference between things that are sacred and things that are not. All life is 'sacred', all conduct has 'moral' results. All life's meaning comes out of this eternal, everpresent Dreaming.

"The sacred is everywhere within the physical landscape. Myths and mythic tracks cross over.. thousands of miles, and every particular form and feature of the terrain has a well-developed 'story' behind it."

This Murrinh-patha mythology is based on a view of life that believes life is "...a joyous thing with maggots at its centre.". Life is good and caring, but during life's journey, there are many painful sufferings that each person must come to understand and live through as he grows. This is the message being told within the Murrinh-patha myths. It is this philosophy that gives Murrinh-patha people reason and meaning in life.

"A woman, Mutjinga (the 'Old Woman'), was in charge of young children, but instead of watching out for them during their parents' absence, she swallowed them and tried to escape as a giant snake. The people followed her, spearing her and removing the undigested children from the body."

Within the myth and in its performance, young children must first be swallowed by an ancestral being who changes into a giant snake. The children are then vomited up before being accepted as young adults with all the rights and benefits of young adults.

The Pintupi peoples from Australia's Gibson Desert region have a mostly 'mythic' form of understanding their identity, All events happen and are explained by the social structures and rules told of, sung about, and performed within their superhuman mythology. That is, the structures of society come from the myths, not from their own political actions, decisions or influences of local individuals.

"The Dreaming.. provides a moral authority lying outside the individual will and outside human creation.. although the Dreaming as an ordering of the cosmos is presumably a product of historical events, such an origin is denied."

"Current action is not understood as the result of human alliances, creations, and choices, but is seen as imposed by an embracing, cosmic order."

Within this Pintupi view of the world, three long geographical tracks of named places control and guide society. They are interrelated strings of important places named and created by mythic characters on their way through the Pintupi desert region during the Dreaming. It is a complex mythology of stories, songs and ceremonies known to the Pintupi as Tingarri. It is most completely told and performed by Pintupi peoples at larger gatherings within Pintupi country.

All content from Kiddle encyclopedia articles (including the article images and facts) can be freely used under Attribution-ShareAlike license, unless stated otherwise. Cite this article:
Australian Aboriginal mythology Facts for Kids. Kiddle Encyclopedia.