Kids Encyclopedia Facts
Not to be confused with Maryborough, Victoria.

Maryborough is a city located on the Mary River in Queensland, Australia, approximately 255 kilometres (160 mi) north of the state capital, Brisbane. The city is served by the Bruce Highway. It is closely tied to its neighbour city Hervey Bay which is approximately 30 kilometres (20 mi) northeast. Together they form part of the area known as the Fraser Coast. At June 2015 Maryborough had an estimated urban population of 27,846. The city was the location for the 2013 Australian Scout Jamboree. 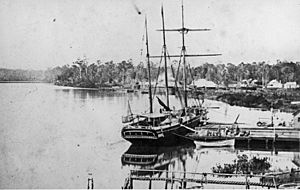 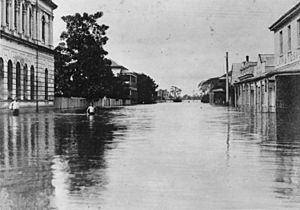 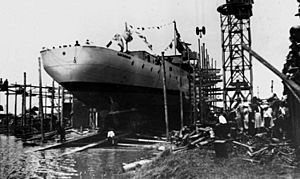 Ship building along the Mary River

Maryborough was founded in 1847, was proclaimed a municipality in 1861, and became a city in 1905. During the second half of the 1800s, the city was a major port of entry to immigrants arriving in Queensland from all parts of the world.

The name was derived from the Mary River which was named in 1847 after Lady Mary Lennox (1790–1847) the wife of Sir Charles Augustus Fitzroy, then Governor of the colony of New South Wales. Lady Mary was killed in a coach accident very soon after, devastating Sir Charles.

The first section of what is now the North Coast Line opened on 6 August 1881, connecting the mining town of Gympie to the river port at Maryborough and followed the Mary River valley. The Queensland Government was under constant pressure to reduce expenditure, and so despite the potential for the line to be part of a future main line, the line was constructed to pioneer standards with minimal earthworks, a sinuous alignment and 17.4 kg/m (35 lb/yd) lightweight rails.

Coal had been discovered at Burrum, 25 km north of Maryborough, and a line was constructed to serve the mine, opening in 1883. The line was extended to Bundaberg in 1888 so coal could be shipped there as well. When the Burrum line was built, it junctioned from the Maryborough line at Baddow, 3 km from the station, creating a triangular junction, with platforms ultimately being provided on all three sides. Maryborough station was situated immediately adjacent to the commercial centre of the city, and converting it into a through station would have been prohibitively expensive.

When through trains commenced running from Brisbane to Bundaberg and beyond, trains ran into Maryborough, a fresh steam locomotive was attached to the other end of the train, and it then departed.

Once diesel locomotives were introduced, there was no need to replace engines, and through trains paused at Baddow on the 3rd leg of the triangular junction before proceeding north. A one carriage connecting service was provided from Maryborough to meet the through train at Baddow, and then return. As trains became longer, the platform on the 3rd leg was not of sufficient length, and the trains would stop on the platform on the line to Maryborough, having to reverse out of, or back into the platform before proceeding further, adding about 15 minutes to the journey. The situation was finally resolved with the opening of the Maryborough West bypass in 1988.

Australia's only outbreak of pneumonic plague occurred in Maryborough in 1905. At the time Maryborough was Queensland's largest port—a reception centre for wool, meat, timber, sugar and other rural products. A freighter from Hong Kong, where plague was rampant, was in the Port of Maryborough about the time that a wharf worker named Richard O'Connell took home some sacking from the wharf, for his children to sleep on. Subsequently, five of the seven O'Connell children, two nurses, and a neighbour died from the disease. There were no more cases but the ensuing fear, panic, and hysteria totally consumed the town, and a huge crowd gathered to witness the family's house being burnt to the ground by health officials. A memorial fountain was built in the grounds of the City Hall and dedicated to the nurses, Cecelia Bauer and Rose Wiles. 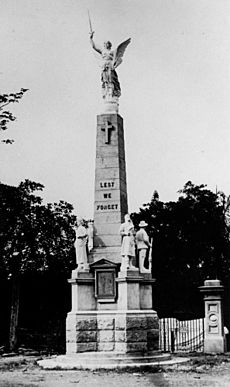 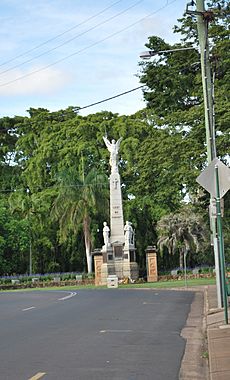 The foundation stone of Maryborough War Memorial was laid on 22 May 1921 by Lieutenant Colonel James Durrant. It was dedicated on 19 November 1922.

Maryborough has a number of heritage-listed sites, including: 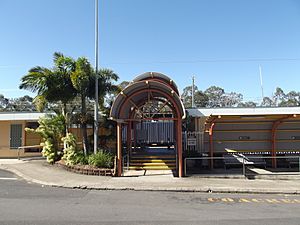 Maryborough West station is on the North Coast line. It is served by long-distance Traveltrain services: the Spirit of Queensland, Spirit of the Outback and the Bundaberg and Rockhamption Tilt Trains.

This station, on the western outskirts of the city, was built in the late 1980s as part of a seven kilometre new alignment built when the North Coast line was electrified. It replaced Maryborough station in the central business district, although the eight kilometre branch remains in use to service the Downer Rail workshops.

Local bus services are provided by Wide Bay Transit as part of the QConnect network.

Maryborough has one sister city, according to the Australian Sister Cities Association.

All content from Kiddle encyclopedia articles (including the article images and facts) can be freely used under Attribution-ShareAlike license, unless stated otherwise. Cite this article:
Maryborough, Queensland Facts for Kids. Kiddle Encyclopedia.