Gympie is a city and a locality in the Gympie Region, Queensland, Australia. In the Wide Bay-Burnett District, Gympie is about 170.7 kilometres (110 mi) north of the state capital, Brisbane. The city lies on the Mary River, which floods Gympie occasionally. Gympie is the administrative centre for the Gympie Region area. As of June 2018 Gympie had a population of 51,578.

Gympie is famous for its gold field. It contains a number of historic buildings registered on the Queensland Heritage Register.

Gympie's name derives from the Kabi (the language of a tribe of Indigenous Australians that historically lived in the region) word gimpi-gimpi (which means "stinging tree"), which referred to Dendrocnide moroides. The tree has large, round leaves that have similar properties to stinging nettles. The town was previously named Nashville, after James Nash, who discovered gold in the area in 1867. The name was later changed to Gympie in 1868. 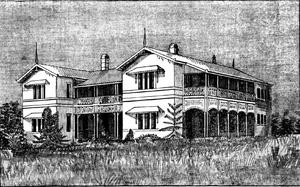 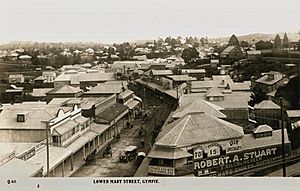 Graziers were the original European settlers. Subsequently, James Nash reported the discovery of 'payable' alluvial gold on 16 October 1867. At the time of Nash's discovery, Queensland was suffering from a severe economic depression. Nash probably saved Queensland from bankruptcy. A memorial fountain in Gympie's Park honours Nash's discovery. The Gympie Gold Rush Festival celebrates the event today. The Gold Rush Festival holds 10 days of cultural events in October. Gold mining still plays a role in the area's fortunes, along with agriculture (dairy predominantly), timber and tourism. The gold rush's rapid development led to streets that are in an irregular fashion.

The railway from Maryborough completed in 1881. The North Coast railway linked Gympie to Brisbane in 1891. A fire brigade was in operation in 1900. The state declared Gympie a town in 1903. A powdered milk factory began operations in 1953. 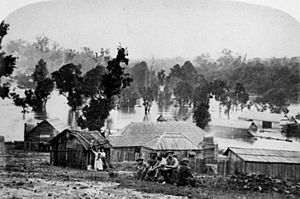 Gympie residents head for higher ground during the flooding in 1870

Numerous highways and roads in and around the town which were destroyed or damaged during floods in 2011 was repaired under Operation Queenslander, the name given to post-flood reconstruction efforts in Queensland.

In March 2012, the Gympie Regional Council decided to spend about $30,000 for a cost benefit analysis on flood mitigation measures. 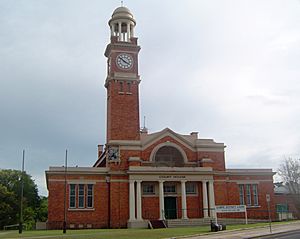 Gympie has a number of heritage-listed sites, including: 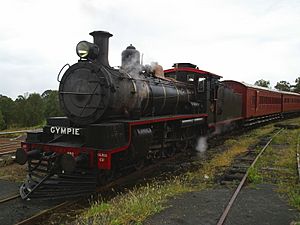 Many attractions are in and around Gympie. The Gympie Gold Mining and Historical Museum houses memorabilia from the early gold mining era, as well as displays showcasing military, rural, transport, communications, and steam development in Australia. The WoodWorks Museum provides an insight into the timber industry and social history of yesteryear through displays and demonstrations. Features include a large selection of pioneering handtools, a 1925 Republic truck, bullock wagons, and a blacksmith shop.

The Valley Rattler steam train winds its way through the backyards of the southern side of Gympie and then continues west into the scenic Mary Valley where it crosses and then follows the Mary River to negotiate the valley and the Mary's main tributaries. The tourist train began operations in 1996. It provides a spectacular journey through the valley beginning at the Old Gympie Railway Station in Tozer Street. This station is the original railway station for the track that passed through Gympie in the 1900s gold rush. Unfortunately the 'Rattler' is currently out of commission due to concerns of track safety. Local community, business, and council people are all working together to find funding for track repair work and formulate plans for the ongoing management and maintenance of the operation.

The Mary Valley has a stunning landscape of rolling green pastures and many beautiful forests. The countryside is spectacular with an abundance of curves, gradients, and bridges. Steep slopes portray a patchwork of pineapples, macadamia nuts, and other crops. The towns of the valley include Dagun, a pretty little ten-house town and Amamoor which hosts the National Country Music Muster, held annually in August. The muster is held over six days and nights in the Amamoor Forest Reserve. Featuring 13 venues full of diverse music, the muster is the largest outdoor country music festival in Australia. The Mary Valley Scenic Drive also travels through Kandanga and Imbil.

Gympie's Mary St offers a wide array of bars, cafes, banks and stores with stunning 19th Century Victorian architecture. The historic Railway Hotel was built in 1915 and is listed on the Queensland Heritage Register. In 2011, the Gympie Town Hall Reserve Complex was added to the Queensland Heritage Register. The two-storey building was built in 1890 and has a clock tower.

Gympie also hosts the Heart of Gold International Short Film Festival in March. The festival is five days of fun, inspiration, and stimulation. Highlights include short films from all corners of the planet, special features and documentaries, parties, seminars, intimate Q & A sessions with filmmakers, and an award ceremony. 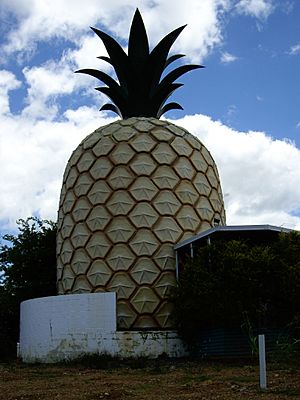 About 30 minutes' drive east of Gympie is Tin Can Bay, where one can hand-feed rare Indo-Pacific hump-backed dolphins in their natural environment. The feeding is regulated for the protection of the dolphins. Tin Can Bay is the southern access point to the Great Sandy Strait, a stunning aquatic playground protected by World Heritage-listed Fraser Island. The strait is an important ecological area with marine turtles, dolphin pods, dugongs, migrating humpback whales and valuable roosting area for migratory birds.

Gympie, Mary Valley, Tin Can Bay, Rainbow Beach, and Cooloola are part of the Great Sandy Biosphere which gives worldwide recognition of the outstanding natural beauty and high levels of biodiversity in this region.

The alleged Gympie Pyramid is also a minor attraction.

Gympie Cemetery Crawls are run by the Gympie Family History Society. Participants learn more about the pioneering families that created the town.

Road connection to Gympie is via the Bruce Highway. Rail connects via QR's North Coast railway line, which is served by daily Queensland Rail City network services to Brisbane and Traveltrain services for long distances. There are few public buses in Gympie and automobiles are the main mode of transportation.

Gympie Airport is a small local airport located to the south of the town. It has general aviation, recreational aviation and gliding communities.

The Queensland Government had plans to build a dam on the Mary River at Traveston Crossing, about 16 kilometres (9.9 mi) south of Gympie, arguing that there is sound geology and that the South East Queensland region needed greater water security due to the threat of climate change and population growth. The project was scrapped in 2010.

The proposed dam would have flooded about 900 properties. The affected land owners and other shire residents staged rallies protesting against the proposed dam. Strong opposition to the dam from the wider and international community based on environmental concerns related to the endangered Mary River cod, Mary River turtle, giant barred frog, Cascade tree frog and Coxen's fig parrot and the vulnerable Queensland lungfish, tusked frog, honey blue-eye fish, the Richmond birdwing butterfly and the Illidge's ant blue butterfly finally shut down the project.

Gympie has many schools, reflecting its importance as a regional service centre. State primary schools include:

Gympie is home to one campus of the Wide Bay Institute of TAFE located on Cartwright Road.

The University of the Sunshine Coast (USC) has a campus in Gympie located on Cartwright Road. This campus offers undergraduate study in primary education, nursing, business, and commerce.

All content from Kiddle encyclopedia articles (including the article images and facts) can be freely used under Attribution-ShareAlike license, unless stated otherwise. Cite this article:
Gympie Facts for Kids. Kiddle Encyclopedia.