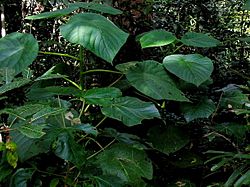 Dendrocnide moroides, the gympie gympie, or gympie stinger, is a plant of rainforest areas in the north east of Australia. It is also found in Indonesia. It has stinging hairs over the whole plant. It delivers a strong neurotoxin when touched. The small bulb on the tip of the stinging hairs break off and penetrating the skin, injecting the toxin. It is the most toxic of the Australian stinging trees. The fruit can be eaten if the stinging hairs that cover it are removed.

Ernie Rider, who was slapped in the face and torso with the foliage in 1963, said:

For two or three days the pain was almost unbearable; I couldn’t work or sleep, then it was pretty bad pain for another fortnight or so. The stinging persisted for two years and recurred every time I had a cold shower. ... There's nothing to rival it; it's ten times worse than anything else.

The sting does not stop several small marsupial species (such as the red-legged pademelon, some insects, such as Prasyptera mastersi, and some birds, from eating the leaves.

All content from Kiddle encyclopedia articles (including the article images and facts) can be freely used under Attribution-ShareAlike license, unless stated otherwise. Cite this article:
Gympie gympie Facts for Kids. Kiddle Encyclopedia.