Noosa Heads is a town and suburb of the Shire of Noosa on the Sunshine Coast, Queensland, Australia. It is located approximately 136 kilometres (85 mi) north of Brisbane, the state's capital.

The Noosa River forms one boundary of the town, the headlands of the Noosa National Park another. Nearby are the suburbs of Tewantin and Noosa Junction, which create a continuous urban area at the northern end of the Sunshine Coast. 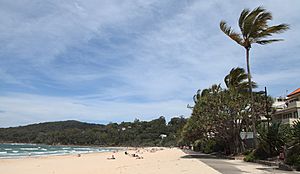 The beach at Noosa Heads has remained a popular tourist attraction since the 1890s. The Shire's tourism exponentially grew shortly after the Second World War.

In the 1800s, Noosa's early wealth came from the timber and milling industries with tourism developing in the late 1920s. In this decade cafes and tourist accommodation was built along the beachfront. The town has been the site of many tussles between developers and those seeking to preserve the town. Since the seventies, people have continued to migrate from southern states.

Noosa Heads has a number of heritage-listed sites, including:

Noosa Heads is the tourist heart of Noosa district, with many restaurants and hotels. The main street is Hastings Street, which lies directly behind the seashore. Buses to elsewhere in the Sunshine Coast depart from Noosa Heads bus station.

There are dedicated bike lanes throughout the shire. Push bikes are an easy way to get around. Bike racks are provided in all shopping and beach precincts.

Motor scooter is another easy option. There are scooter parking bays on Hastings Street, Noosa Heads, and on many shopping strips.

There is a taxi rank in Hastings Street and at Noosa Fair shopping centre. 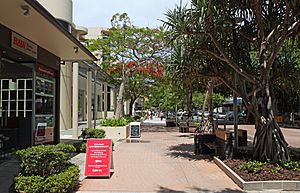 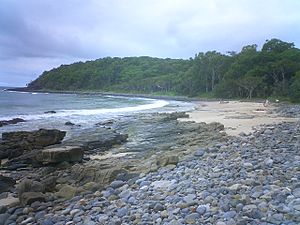 A beach on the headlands hike, coastal trail

Noosa Heads hosts a population of koalas, which are often seen in and around Noosa National Park. The koala population in Noosa is in decline.

To overcome severe beach erosion at Noosa's main beach a sand pumping system has been built. It operates when necessary during off peak hours, supplying sand via a pipeline built underneath the boardwalk.

Noosa Heads' main attraction is its beaches. Its main beach and its small bays around the headland are common surfing locations which are known on world surfing circuits. One of its major surfing contests involves the Noosa Festival of Surfing. This festival attracts large numbers of longboarders. A fatal shark attack of a 22-year-old surfer was recorded at Noosa in 1961.

All content from Kiddle encyclopedia articles (including the article images and facts) can be freely used under Attribution-ShareAlike license, unless stated otherwise. Cite this article:
Noosa Heads, Queensland Facts for Kids. Kiddle Encyclopedia.