Sunshine Coast is a peri-urban area and the third most populated area in the Australian state of Queensland. Located 100 km (62 mi) north of the state capital Brisbane in South East Queensland on the Pacific Ocean coastline, its urban area spans approximately 60 km (37 mi) of coastline and hinterland from Pelican Waters to Tewantin. The estimated urban population of Sunshine Coast as at June 2015 was 302,122, making it the 9th most populous in the country.

The area was first settled by Europeans in the 19th century with development progressing slowly until tourism became an important industry. The area has several coastal hubs at Caloundra, Kawana Waters, Maroochydore and Noosa Heads. Nambour and Maleny have developed as primary commercial centres for the hinterland, although Maleny falls outside the urban area defined by the ABS that this article refers to. 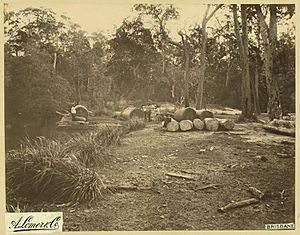 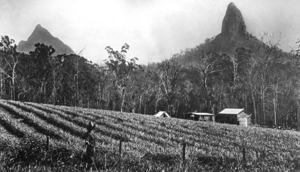 Pineapple plantation in the 1930s 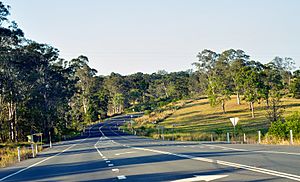 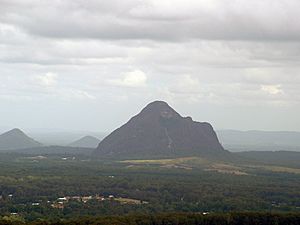 James Cook on the deck of HM Bark Endeavour in 1770 became the first known white settler to sight the Glass House Mountains, located south-west of Caloundra.

In the 1820s, the Sunshine Coast saw its first white inhabitants: three castaways (Finnegan, Pamphlet and Parsons) who shared the life of the local (Kabi Kabi) Aborigines for eight months. Thereafter, during the 1830s to 1840s, the district became home to numerous runaway convicts from the Moreton Bay (Brisbane) penal colony slightly to the south.

In 1842, Governor George Gipps had the entire Sunshine Coast and hinterland from Mt Beerwah north to roughly Eumundi declared a "Bunya Bunya Reserve" for the protection of the bunya tree after Andrew Petrie advised him of the importance of bunya groves in Aboriginal culture. However, during the 1840s and 1850s, the Bunya Bunya Reserve and its vicinity became the scene of some of the most bitter skirmishes of Australia's "Black War". The Blackall Range, on account of the tri-annual Bunya Festival, served as both a hideout and rallying point for attacks against white settlement. By the 1850s timber cutters and cattlemen had started exploiting the area; in 1860 the Bunya Bunya Reserve was scrapped.

Many of the Sunshine Coast's towns began as simple ports or jetties for the timber industry during the 1860s and 1870s, as the area once had magnificent stands of forest. Likewise, the region's roads often began as snigging tracks for hauling timber. Timbergetters used the region's creeks, rivers and lakes as seaways to float out their logs of cedar – the resultant wood being shipped as far afield as Europe.

During the Gympie Gold Rush (1867), prospectors scaled the Sunshine Coast mountains to develop easier roadways to and from the gold fields of Gympie. After construction of the railway line to Gympie, the coastal and river towns, being mostly ports for the early river-trade, were bypassed.

By the 1890s diverse small-farming (fruit and dairy) had replaced the cattle-and-timber economy of earlier decades. Sugar cane and pineapples proved especially important produce for the district. Many small hamlets and towns now emerged. Produce was initially taken by horse to Landsborough, then to Eudlo in 1891.

Especially after World War II, the Sunshine Coast grew into a favoured holiday and surfing destination. This tendency was further expanded in the development boom of the 1960s and 1970s. Around the same time, various tourist/theme parks were created – the most iconic being Woombye's "Big Pineapple". During the 1960s and 1970s, the Sunshine Coast also attracted persons drawn to alternative lifestyles. These newcomers developed a range of craft industries, co-operatives and spiritual centres, particularly in the hinterlands.

After the 1980s, the Sunshine Coast experienced rapid population growth. As of 2011[update] it had become one of the fastest-growing regions in Australia. As the region becomes increasingly residential, most of the district's distinctive small farms – especially tropical-fruit and sugar-cane farms have disappeared, as have most of its theme parks. The Moreton sugar mills closure in 2003 removed a market for the district's 120 cane growers who had been harvesting cane in the region. Instead, businesses concerned with retail, catering and tourism have assumed increasing importance. 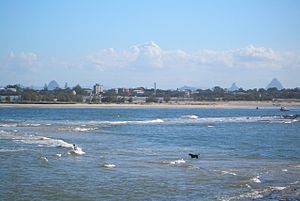 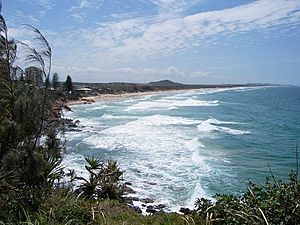 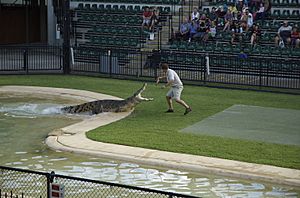 There are many localities within the Sunshine Coast region, including the former local government areas of Maroochy Shire and the City of Caloundra as well as the current Noosa Shire. Major rivers of the Sunshine Coast include Noosa River, Maroochy River, Mooloolah River and the Stanley River. The region includes several lakes such as Lake Cootharaba and Lake Weyba. Ewen Maddock Dam, Wappa Dam and Baroon Pocket Dam have been built for water storage.

Several stretches of the Sunshine Coast are lined with unbroken beaches – from Sunshine Beach near Noosa to Coolum Beach (17 km (11 mi)); the coast from Point Arkwright to Mudjimba (11 km (6.8 mi)); the Maroochydore–Mooloolaba stretch (5.6 km (3.5 mi)); and from Buddina past the Caloundra CBD to Pelican Waters (22 km (14 mi)). Notable beaches include:

The Sunshine Coast is a centre for tourism, attracting more than 3.2 million visitors a year. There are significant attractions, such as Steve Irwin's Australia Zoo, UnderWater World marine park, Aussie World with the Ettamogah Pub, The Buderim Ginger Factory, The Big Pineapple, the Eumundi Markets and the Majestic Theatre at Pomona.

The Sunshine Coast region is home to more individual national parks than any other region in Queensland. The natural biodiversity of the area has been protected by five separate parks in both coastal and inland regions, including Mapleton Falls National Park, Kondalilla National Park, The Glass House Mountains National Park, Noosa National Park, and the Great Sandy National Park, which includes sections on Fraser Island and in Cooloola near Rainbow Beach.

Sunshine Coast has a humid subtropical climate typical of South Queensland. Summers are generally hot, but moderated compared to areas on similar latitudes elsewhere. Winters retain warm days, but have cooler nights rendering it falling into the subtropical fold. There is no dry season and precipitation is generally quite high.

All content from Kiddle encyclopedia articles (including the article images and facts) can be freely used under Attribution-ShareAlike license, unless stated otherwise. Cite this article:
Sunshine Coast, Queensland Facts for Kids. Kiddle Encyclopedia.