Dicky Beach is both a beach and coastal suburb of Caloundra in the Sunshine Coast Region, Queensland, Australia. In the 2016 census, Dicky Beach had a population of 1,895 people. 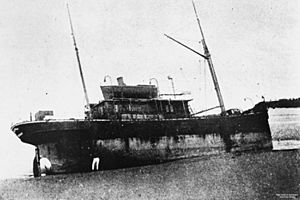 SS Dicky, aground at Caloundra 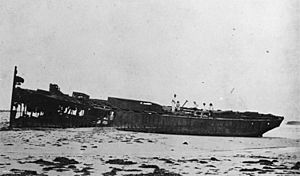 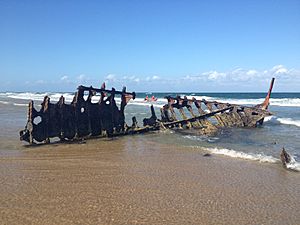 The area was named after the iron steamboat, the SS Dicky (226 gross tons), which ran aground during heavy seas on 12 February 1893. It was refloated, but again, heavy seas turned the ship about and back onto the sand where it remained. Dicky Beach remains the only recreational beach in the world to be named after a shipwreck.

The ship was used as a venue for dances until a kerosene lamp overturned and burned out the ship.

In April 1963, the propeller was removed by the Landsborough Shire Council to use on a memorial cairn, accompanied by a plaque provided by the Queensland Women's Historical Association. The opening ceremony was performed by Queensland Premier Frank Nicklin on 24 November 1963.

In 2014, the Sunshine Coast Regional Council decided that the deterioration of the wreck had created a hazard for swimmers due to sharp edges becoming revealed by shifting sand. The decision was taken to relocate the wreck away from the beach. Some deeply buried parts of the wreck will remain on the beach; other parts will be relocated into a foreshore park with an interpretive display, while other parts will be conserved and stored. It is expected that over time more of the wreck will be exposed and will be progressively removed.

All content from Kiddle encyclopedia articles (including the article images and facts) can be freely used under Attribution-ShareAlike license, unless stated otherwise. Cite this article:
Dicky Beach, Queensland Facts for Kids. Kiddle Encyclopedia.