Caloundra is a coastal town and the southernmost town in the Sunshine Coast Region in South East Queensland, Australia.

Caloundra is 90 kilometres (55.9 mi) north of the Brisbane central business district. Caloundra is accessible from Landsborough railway station, 21 km away, and the Caloundra bus station.

In 1875, Robert Bulcock, an English immigrant who founded a Brisbane newspaper and later represented the Brisbane electorate of Enoggera in the Legislative Assembly of Queensland from 1885 until 1888, bought 277 acres (1.12 km2) of land in the region. A town was surveyed in the 1870s, and land sales commenced in 1883. The first allotments of land in Caloundra were advertised for public auction on 28 August 1883. The map states 'the land is of a sandstone nature, undulating and ridgy, heavily timbered with Gum, Bloodwood, Tea-tree and Oak'. A 1907 map shows several sections from George Street to Ernest St advertised for auction on 7 January 1907 by the Government Land Office.

With its proximity to beaches, the area became popular with tourists and a number of hotels and guest houses were set up to accommodate them. 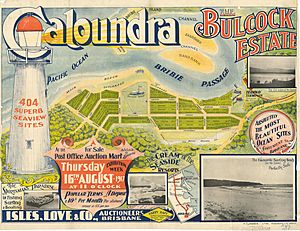 In 1917, Bulcock's son, Robert Bulcock Jr, who was a councillor in the Shire of Landsborough, subdivided part of the land into 404 lots. This area became known as Bulcock Beach. 404 allotments of 'Bulcock Estate' were advertised for auction on 16 August 1917 by Isle, Love and Co, auctioneers, with an edge of the Estate mapped as adjacent to Tripcony's store and the Tramway terminus.

In 1919, 29 subdivided allotments of 'Caloundra Heads Estate' were advertised to be auctioned on 20 December 1919 by Cameron Bros. in Brisbane. A map advertising the auction shows the majority of blocks were on Albert Street between King Street and King's Beach. Another undated map shows more blocks of this estate were advertised for auction on King Street towards Ernest Street.

On Saturday 29 December 1934, Caloundra Methodist Church was opened and dedicated by the President of the Methodist State Conferece, C. C. Truman. It was the first church in Caloundra.

The Caloundra branch of the Queensland Country Women's Association was established in July 1937.

The first female councillor was Miriam Westaway, who represented Division 5 from 29 April 1961 to 30 March 1973. She was one of the first teachers at Caloundra State School. She was active in community groups such as the RSL Women's Auxiliary and a founder of the Caloundra Branch of the Queensland Country Women's Association and the local branch of the Red Cross.

During World War II, the area became key to Australian defence due to defensive positions along the beaches. Radar stations and machine gun pits were mounted, and Australian and US armed forces came to the area. From the early 1950s onwards, Caloundra experienced a boom in development and population, and by 1968, it had come to dominate the Shire of Landsborough so completely that the council chambers were relocated to Caloundra.

The Caloundra Library opened in 1986 with a major refurbishment in 2017. 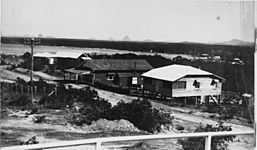 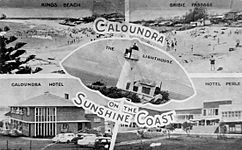 Caloundra has a number of heritage-listed sites, including:

Caloundra is not strictly defined, but the boundary used by the Australian Bureau of Statistics for census purposes and the urban zone defined by the Sunshine Coast Regional Council (formerly the Caloundra City Council) almost exactly coincide. This region is bounded roughly by Currimundi Creek, Rainforest Drive and the Mooloolah River to the north, Beerwah State Forest and Bruce Highway to the west, the Pumicestone Passage (separating the area from Bribie Island) and the ocean to the east, and Bells Creek to the south. The central business district (CBD) for the area is located on Bulcock Street, Caloundra.

The Caloundra urban centre consists of the following suburbs: 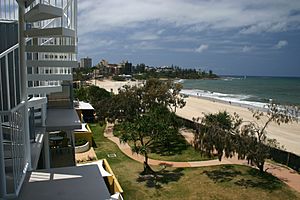 Census populations for the Caloundra urban centre have been recorded since 1933. Since the 2001 census, it is divided between the Caloundra North and Caloundra South statistical local areas. The drop between 1981 and 1986 reflects an adjustment of the boundary with the Kawana Waters urban centre. 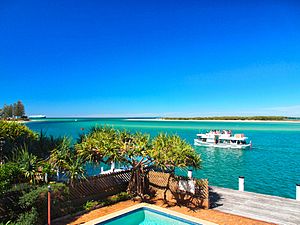 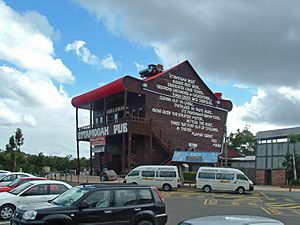 Caloundra has a variety of beaches, providing amenity to the local residents and tourists.

The Caloundra branch of the Queensland Country Women's Association meets at 17 Kalinga Street.

Caloundra has won the Australian Tidy Town Award in 2012.

All content from Kiddle encyclopedia articles (including the article images and facts) can be freely used under Attribution-ShareAlike license, unless stated otherwise. Cite this article:
Caloundra Facts for Kids. Kiddle Encyclopedia.