The Moreton Bay Marine Park was established in 1992 to protect ecologically significant habitats in Moreton Bay. The marine park extends from Caloundra south to the southern tip of South Stradbroke Island. The marine park's border extends up to the highest tidal mark and covers a total of 3,400 km2.

The marine park provides protection to sensitive reef sites near Tangalooma and Flinders Reef. It includes waterways such as Coombabah Lake, mangrove forests, swamps, marshes, tidal mudflats, sandflats and seagrass beds. It is a temporary home to migrating shorebirds that inhabit wetlands. Dugongs, whales and turtles swim in the waters of the bay.

The marine park is managed by the Queensland Parks and Wildlife Service. In 1971, a total of 18 countries signed a Convention on Wetlands of International Significance. It was signed in Ramsar, a city in Iran, and came to be known as the Ramsar Convention, which aimed at stopping global loss of wetlands, and conservation and sustainable management of the remaining wetlands. Moreton Bay is among Australia's largest sites which is listed under the Ramsar Convention.

The Queensland Government has spent AU2$ million to create three artificial reefs within the marine park. A free user guide is widely available in bait and boat shops in the region as well as online. 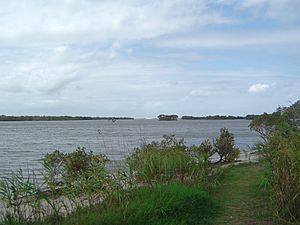 There are four zones in Moreton Bay Marine Park. These are the Marine national park zone (green) which contain areas of high conservation value, Conservation park zone (yellow) allowing limited fishing and crabbing, Habitat protection (dark blue) zone for sensitive habitats with no trawling allowed and General use zone (light blue) allow activities such as trawling. The zones are patrolled by rangers. Fines of up to A$500 for fishing in the green zone have been issued.

There are nine types of designated areas in the marine park. These areas have been set aside so that specific issues that occur at specific locations can be properly managed. Examples of designated areas include Go slow areas to protect dugongs and turtles, No anchoring areas to protect sensitive reefs and Grey nurse shark areas designed to conserve the endangered shark species.

All content from Kiddle encyclopedia articles (including the article images and facts) can be freely used under Attribution-ShareAlike license, unless stated otherwise. Cite this article:
Moreton Bay Marine Park Facts for Kids. Kiddle Encyclopedia.