South East Queensland (SEQ) is a bio-geographical, metropolitan, political, and administrative region of the state of Queensland in Australia, with a population of approximately 3.8 million people out of the state's population of 5.1 million. The area covered by South East Queensland varies, depending on the definition of the region, though it tends to include Queensland's three largest cities: the capital city Brisbane; the Gold Coast; and the Sunshine Coast. Its most common use is for political purposes, and covers 22,420 square kilometres (8,660 sq mi) and incorporates 11 local government areas, extending 240 kilometres (150 mi) from Noosa in the north to the Gold Coast and New South Wales border in the south (some sources include Tweed Heads (NSW) which is contiguous as an urban area with Brisbane/Gold Coast), and 140 kilometres (87 mi) west to Toowoomba (which is simultaneously considered part of the Darling Downs region).

South East Queensland was the first part of Queensland to be settled and explored by Europeans. Settlements initially arose in the Brisbane and Ipswich areas with activity by European immigrants spreading in all directions from there. Various industries such as timber cutting and agriculture quickly developed at locations around the region from the 1840s onwards. Transport links have been shaped by the range of terrains found in South East Queensland.

The economy of South East Queensland supports and relies on a wide diversity of agricultural manufacturing industries, commerce and tourism. The region has an integrated public transport system, TransLink.

South East Queensland, classified as an interim Australian bioregion, comprises 7,804,921 hectares (19,286,380 acres) and includes the Moreton Basin, South Burnett, and the Scenic Rim along with ten other biogeographic subregions. The term South East Queensland has no equivalent political representation. The area covers many lower house seats at the federal and state levels. As Queensland has no upper house, there are no Legislative Council provinces or regions to bear the name either. 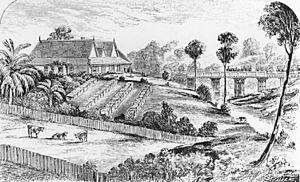 Early explorers in the area including Matthew Flinders, Allan Cunningham, John Oxley and Patrick Logan. Around 1839, European settlers were able to move into the region. Logging was the first industry to develop. The first railway built in Queensland linked Grandchester to Ipswich in 1865 along a narrow 1067 mm gauge.

Queensland's third highest peak, Mount Barney, is located in the south of the region. The Cunningham Highway passes southwest to the Darling Downs via Cunninghams Gap. Several highways including the Bruce Highway, Warrego Highway and the Pacific Motorway link to the adjoining regions. 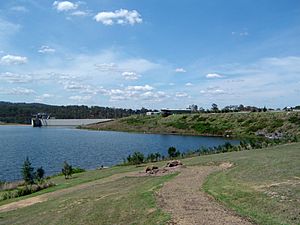 Wyaralong Dam was opened in 2011 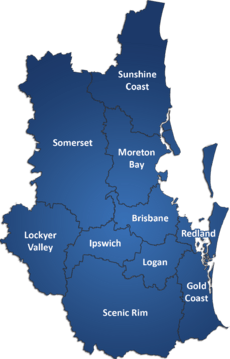 Local government areas in the region 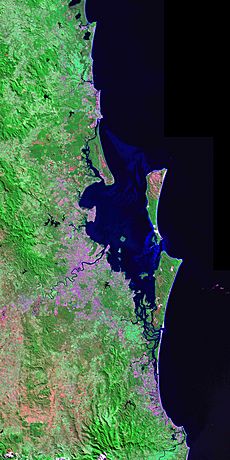 South-East Queensland from the Landsat 7 satellite

South East Queensland generally consists of the following regions, each of which is also a local government area (LGA):

The Tweed Shire is actually within NSW but is often included in planning processes for SEQ. While not officially part of the TransLink public transport network, Surfside Buses run a seamless service across the border that appears to passengers as though it is integrated.

A highly effective integrated ticketing system for public transport has averted transport gridlock in the region.

New urban centres are currently being develop at Springfield, Ecco Ripley, Yarrabilba and Flagstone. Some geographers suggest several more master-planned communities will be needed to cater for the expected population growth rates.

As of 2014, the population of South East Queensland is estimated to be approximately 3.4 million, meaning that between one in six and one in seven Australians call the region home. The regional population is heavily urbanised and concentrated along the coast. The three largest population centres of Brisbane, Gold Coast and the Sunshine Coast account for 90 per cent of the region's population. In the year to June 2020, the City of Ipswich was the fastest growing local government area in Queensland.

South East Queensland is one of the fastest-growing regions in Australia. Growth in the state is fueled principally by migration from the southern states and overseas. In 2010, South East Queensland's population grew by an average of about 1,200 new residents each week.

The region has experienced significant population growth over the last two decades, growing on average by 55,000 to 80,000 people a year since 1986. South East Queensland is expected to be home to 4.4 million by 2031. A 2010 report concluded that the region will reach 5.5 million people by 2051.

Population growth was putting pressure on schools and hospitals in the region in 2021.

South East Queensland's future development will be heavily based on the South East Queensland Regional Plan, released by the Queensland state government in 2005. The regional plan covers the period from 2009–2031 and focuses on slowing development along the coast, in order to prevent creating a 200 km city, and instead aim for growth in the west, in particular around Springfield and Beaudesert. Infrastructure planning in South East Queensland is almost exclusively designed to facilitate trans-metropolitan travel and reduce traffic congestion.

All content from Kiddle encyclopedia articles (including the article images and facts) can be freely used under Attribution-ShareAlike license, unless stated otherwise. Cite this article:
South East Queensland Facts for Kids. Kiddle Encyclopedia.