The City of Gold Coast is the local government area spanning the Gold Coast, Queensland, Australia and surrounding areas. Based on resident population in the 2011 census, it is the second largest local government area in Australia (City of Brisbane being the largest). Its council maintains a staff of over 2,500. It was established in 1948, but has existed in its present form since 2008. 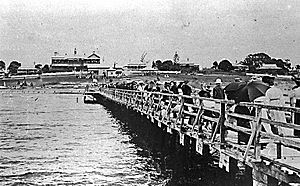 By the late 1870s, the Government of Queensland had become preoccupied with the idea of getting local residents to pay through rates for local services, which had become a massive cost to the colony and were undermaintained in many areas. The McIlwraith government initiated the Divisional Boards Act 1879 which created a system of elected divisional boards covering most of Queensland. It was assented by the Governor on 2 October 1879, and on 11 November 1879, the Governor gazetted a list of 74 divisions which would come into existence. Four of these—Nerang, Coomera, Beenleigh and Waterford—were in the Gold Coast region. Southport was developed as both an administrative centre as well as a holiday destination with hotels and guesthouses to cater for visitors. Town dwellers had different needs to the rural landholders so Southport ratepayers lobbied the colonial government to create a separate Divisional Board so that rates monies raised by Southport landholders could be spent on town improvements. This resulted in the establishment of the Southport Division on 14 July 1883 by an amalgamation of part of Nerang Division and part of Coomera Division. 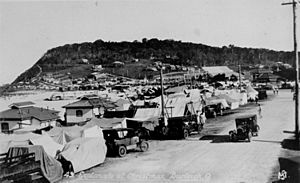 On 31 March 1903, following the enactment of the Local Authorities Act 1902, the divisions became shires. On 12 June 1914, the Town of Coolangatta was created from part of the Shire of Nerang, and on 12 April 1918, Southport became a Town. 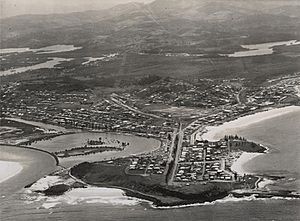 On 9 December 1948, as part of a major reorganisation of local government in South East Queensland, an Order in Council created the Town of South Coast by amalgamating Town of Southport, Town of Coolangatta and coastal sections (around Burleigh Heads)of the Shire of Nerang, creating a narrow coastal strip. The same Order abolished all of the earlier Shires and amalgamated most of their area into the new Shire of Albert, with the rest becoming part of the Shire of Beaudesert. The Order came into effect on 10 June 1949, when the first elections were held for the new councils.

On 23 October 1958, the Town of the South Coast adopted the name of Town of Gold Coast, and on 16 May 1959, the Town was proclaimed as the City of Gold Coast by the Governor of Queensland, having met the requirements for city status. Most of what is now regarded as the Gold Coast urban area was at that time located within the Shire of Albert, which had its administrative offices in Nerang-Southport Road, Nerang.

On 19 March 1992, the Electoral and Administrative Review Commission, created two years earlier, produced its report External Boundaries of Local Authorities, and recommended a number of changes to local government boundaries and the amalgamation of some local governments. Although their recommendations only included boundary adjustments between the Gold Coast City and Albert Shire, the outcome following much public debate was a decision by the Queensland Government to absorb Albert Shire into Gold Coast City. The Local Government (Albert, Beaudesert and Gold Coast) Regulation 1994 was gazetted on 16 December 1994, resulting in the amalgamation of the Shire of Albert into Gold Coast City at the 1995 local government elections.

In 2007, as part of a report recommending massive amalgamation of local government in Queensland, the Local Government Reform Commission recommended that the Beenleigh-Eagleby region on the Gold Coast's northern border be transferred to Logan City, on the basis that a common community of interest existed and that planning of the South East Queensland urban footprint would be made more efficient by the change. The area to be excised was estimated by the Commission to have an area of 49 km2 (18.9 sq mi) and a population of 40,148. The change took effect at 15 March 2008 local government elections.

The Gold Coast has many heritage-listed sites, including those at:

Populations are provided below for the Gold Coast (Southport/Coolangatta, South Coast, Gold Coast) and Albert entities. As Albert included the entire Logan City area prior to 1978, figures are only provided from the 1976 census. 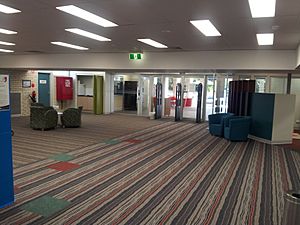 The City of Gold Coast has 13 libraries, a special needs library (located within Nerang Branch Library), a Local Studies Library (on the first floor above Southport Branch Library) and a mobile library service. and is a member of the Queensland Public Libraries Association. They are located at Broadbeach, Burleigh Heads, Burleigh Waters, Coolangatta, Elanora, Helensvale, Mudgeeraba, Nerang, Palm Beach, Robina, Runaway Bay, Southport and Upper Coomera. 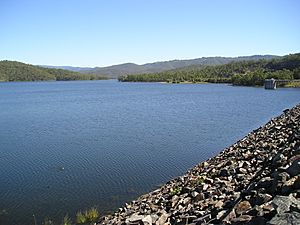 Hinze Dam was upgraded in 2011

All content from Kiddle encyclopedia articles (including the article images and facts) can be freely used under Attribution-ShareAlike license, unless stated otherwise. Cite this article:
City of Gold Coast Facts for Kids. Kiddle Encyclopedia.