Burleigh Heads is a suburb on the Gold Coast in Queensland, Australia. At the 2011 Census, Burleigh Heads had a population of 9,188.

The suburb boundary extends as far north as Miami Headland, Miami, and as far south as Tallebudgera Creek, Palm Beach. To the west, is the township of West Burleigh, with shopping and industrial areas, and Burleigh Waters, a suburb with a man-made lake, council parks and gardens. The centre of the neighborhood is James Street, which consists of cafes, delis, hairdressers, retailers, chemists, restaurants and charity stores.

Burleigh Heads' surf break attracts surfers from the Gold Coast and beyond. At the headland of Burleigh, locally known as "The Point", barbecues and cricket matches are held, and spectators can watch the surfers. On Sunday afternoons, local musicians and fire-twirlers often come out to the park beside Burleigh SLSC for a jam and dance session. 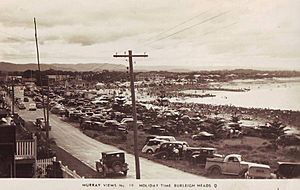 A 1940s postcard of Burleigh Heads

Indigenous Australians inhabited the area of Burleigh Heads for thousands of years prior to European settlement. The Indigenous tribe were known as the Kombumerri people, who had named the area 'Jellurgal'.

In 1840, James Warner was commissioned to survey the coastline near Moreton Bay. Warner named the headlands near Tallebudgera Creek, 'Burly Head' because of its massive appearance. Decades later the name was adapted to the more genteel spelling of 'Burleigh Heads' and was declared a town reserve by the Queensland Government in 1871.

By 1873, the township had been surveyed, a number of the allotments sold and a track created connecting Burleigh Heads to Nerang. References to its magnificent beach were starting to appear and reports in newspapers suggested that Burleigh Heads' natural beauty had the potential to eclipse all other seaside locations in the region. However, despite the eventual sale of all the allotments in the township, by 1885, there was only one accommodation house run by Fredrick Fowler and very few, if any, privately owned houses. Further subdivisions and land sales took place in Burleigh during 1914, 1915, 1930, 1929 and 1947. 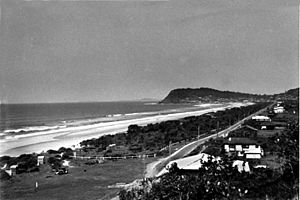 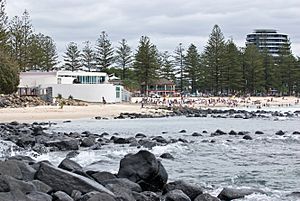 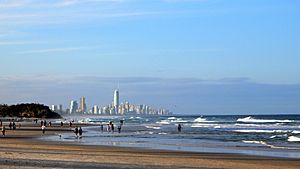 Burleigh Heads Beach with the Gold Coast skyline in the distance, 2003

The northern section appears to have been subdivided by the mid 1950s, but was the site of extensive sand mining in the following decades. The broad beachfront park is a legacy of that activity.

Burleigh township itself is much older and was the site of early development including restaurants and guest houses to support the increasing interest in bathing that took place in the last years of the 19th century and the first of the 20th century. It has been the centre of beach activities and a camping site for many years. The commercial centre of James and Conner Streets was established by the 1930s and began to boom during the postwar period.

Burleigh Heads has a number of heritage-listed sites, including the David Fleay Wildlife Park and the West Burleigh Store, both located on Tallebudgera Creek Road.

The area of Burleigh Head was formed between 20 and 23 million years ago from molten lava due to numerous eruptions of Mount Warning. Flowing lava reached the shore in the area to form Burleigh headland and Point Danger. Geological processes that shaped the region resulted in a variety of different rock types, influencing the landscape, vegetation types and the animals they sustained. Queensland University geologists and students began coming to the area to collect specimens in the 1920s.

Burleigh Headland is part of a wildlife corridor connecting coastal forests south to the Queensland New South Wales border ranges. Burleigh Ridge Park Reserve has a diverse habitat due to its geology. Conservation of the area has preserved many local plants that indigenous people would have used over 200 years ago. There are Eucalypt forest species favoured by Koalas. Other native wildlife include flying foxes, gliders and over 60 bird species.

Gold Coast Highway travels along the eastern side of the suburb passing through the heart of suburb. Gold Coast highway connects Burleigh Heads with all the coastal suburbs on the Gold Coast. West Burleigh Road (State Route 80) eventually becomes Reedy Creek Road after an intersection in front of Stocklands Burleigh Heads, connects the heart of the suburb with the Pacific Motorway and Varsity Lakes railway station. 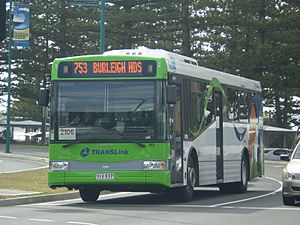 A Translink bus along the Gold Coast Highway, Burleigh Heads

Burleigh Heads is serviced by Translink services, a subsidiary of the Department of Transport and Main Roads, who operate an integrated ticketing system throughout South East Queensland. Burleigh Heads Bus stop is the main bus stop in the suburb, located on the Gold Coast Highway. A bus service connects Burleigh Heads with the Gold Coast Airport, Tweed Heads, Robina and Broadbeach.

The north-east facing beach is protected by the point to the south and offers one of the best swimming, body boarding and surfing beaches on the Gold Coast. A mature stand of Norfolk Island Pines — originally planted by the Justins family and reputably some of the earliest planted at the coast — and more recent plantings together totalling some 450 Norfolk Pines; form a backdrop and are home to native birds.

Burleigh Heads State School is home to The Village Markets. A bi-monthly event that promotes local emerging designers and artists.

All content from Kiddle encyclopedia articles (including the article images and facts) can be freely used under Attribution-ShareAlike license, unless stated otherwise. Cite this article:
Burleigh Heads, Queensland Facts for Kids. Kiddle Encyclopedia.