Elanora is a suburb of the City of Gold Coast in Queensland, Australia. In the 2016 census, Elanora had a population of 12,145 people.

Elanora, an Aboriginal word for "home by the sea", was originally named as a platform on the South Coast Rail Line in 1922. 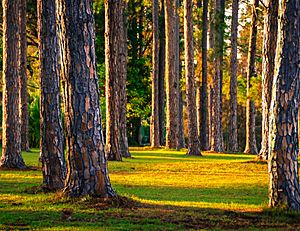 Elanora is bounded by Tallebudgera Creek to the northwest, Pacific Motorway to the northeast and east, and Guineas Creek and Simpsons Roads to the southeast. It contains Elanora State High School, Elanora Primary School and a small neighbourhood shopping centre on Nineteenth Avenue, and The Pines, a larger shopping centre on Guinness Creek Road. Elanora also has a large public library. Under the Queensland Government proposal to extend the Gold Coast railway line, a station at Elanora, near The Pines Shopping Centre has been proposed.

All content from Kiddle encyclopedia articles (including the article images and facts) can be freely used under Attribution-ShareAlike license, unless stated otherwise. Cite this article:
Elanora, Queensland Facts for Kids. Kiddle Encyclopedia.