Coolangatta is the southernmost suburb of City of Gold Coast, Queensland, Australia. It is named after the schooner Coolangatta which was wrecked there in 1846. At the 2011 Australian Census the suburb recorded a population of 5,193.

Coolangatta and its immediate neighbouring "Twin Town" Tweed Heads in New South Wales have a shared economy. The Tweed River supports a thriving fishing fleet, and the seafood is a local specialty offered in the restaurants and clubs of the holiday and retirement region on both sides of the state border. The Gold Coast Airport, formerly known as Coolangatta Airport, is located at Coolangatta, with some of the runway going across the border into New South Wales. 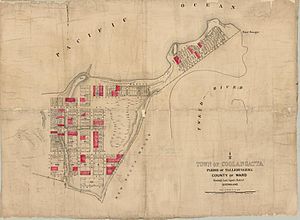 Estate map of the town of Coolangatta, Queensland, 1885

Coolangatta was one of the earliest settlements on the Gold Coast. Once again focused on a steep headland at Point Danger the area was occupied by Europeans from at least 1828 by a convict station and red cedar getters soon followed. Selectors followed in the 1860s and a small settlement at Coolangatta was established. In 1883 a township was surveyed. 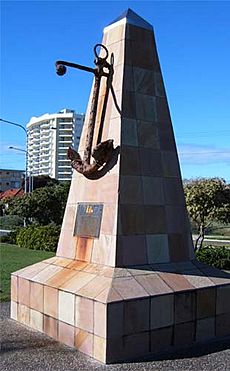 A topsail schooner of 83 feet (25 m) in length and 88 long tons (89 t), Coolangatta was built by John Blinksell in 1843 for Alexander Berry whose property, Coolangatta Estate, adjoined Coolangatta mountain located on the northern bank of the Shoalhaven River, New South Wales. Coolangatta was wrecked on Kirra / Bilinga Beach adjacent to a creek during a storm on Wednesday August 18, 1846.

On July 6, 1846, the ship sailed under Captain Steele from Brisbane, carrying two convict prisoners (George Craig in irons, and William George Lewis), to load red cedar logs at the Tweed River for Sydney. Steele found the river entrance closed by silt forming a bar, so he anchored in the lee of Point Danger off Kirra Beach. Red cedar logs were then hauled overland from Terranora Inlet and rafted from the beach, but in six weeks less than half of the contracted 70,000 feet of red cedar had been loaded. Meanwhile, five ships loaded with red cedar were bar-bound inside the river.

On August 18, 1846, while Steel was ashore, a south-east gale blew up. Steele's boat was damaged while getting through the surf and he watched from the beach as the gale intensified. Eventually, the prisoners were freed and all hands abandoned ship and swam for shore as the anchors dragged. The ship parted its anchors and washed ashore near what was later called Coolangatta Creek.

The survivors walked 70 miles (110 km) north to Amity Point in six days, fed each night by different groups of friendly indigenous Australians, and were taken into Brisbane on board the Tamar. Government surveyor Henry Schneider named the area Coolangatta while surveying in 1883 for the land auction in March 1884. 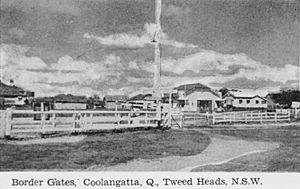 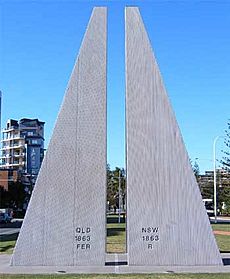 As a border town Coolangatta included a customs office, boatshed and government wharf. Extension of the South Coast railway from Nerang railway station to Tweed Heads opened on 10 August 1903. The Coolangatta railway station was located to the south-west of the intersection of Griffith and Dutton Streets (28°10′08″S 153°32′09″E﻿ / ﻿28.16880°S 153.53595°E﻿ / -28.16880; 153.53595﻿ (Coolangatta railway station)) in New South Wales resulting in a Queensland Railway Station being located in another state. The railway guaranteed the success of Coolangatta as a holiday township and it flourished from that time forward. The Tweed Heads and Coolangatta Surf Life Saving Club opened on 13 September 1911. Guesthouses and hotels were erected and a commercial centre soon followed.

In January 1919 the border between Queensland and New South Wales was closed to all traffic in response to the 1918 flu pandemic in an attempt to stop the spread of the disease north into Queensland. People found themselves stranded on the one side of the border unable to return to their homes or employment on the other side. Quarantine stations and camps were established to house travelers and stranded residents. One impact on the border closure was the need to duplicate services across the twin towns on the Queensland side of the border. The border remained closed until May 1919. One of the services that required duplication was a school for children living north of the border and a school was established at 1 Garrick Street. The school buildings have been re-purposed as a Community Centre and are on the Gold Coast Local Heritage Register.

An unnamed cyclone crossed the coast at Coolangatta on the night of 20 February 1954. The storm quickly cleared from Queensland skies but moved south, causing widespread loss of life and flooding in New South Wales. The railway line closed in 1961 due to the rising use of cars.

The border fence and gates that until recently were a characteristic of the area have now been removed but the sense of the border remains at Boundary Street running along the ridge of the headland between Queensland and New South Wales. The headland itself is an important landmark and tourist destination and is the site of the Point Danger Lighthouse. Coolangatta symbolises the terminus of the Gold Coast and the long strip of beach that begins at Main Beach forty kilometres to the north.

Coolangatta and its surrounds were the home of two early tourist attractions on the Gold Coast. Jack Evans Porpoise Pool which was built at Snapper Rocks in 1957 and Gilltraps Auto Museum which was established at Kirra in 1959.

To commemorate the centenary of Coolangatta, in 1984 a stone from the Coolangatta Estate homestead was donated by the citizens of Coolangatta near Berry, New South Wales and was mounted on a plinth of granite from Aberdeen, Scotland, the birthplace of Alexander Berry.

Coolangatta has a humid subtropical climate (Köppen climate classification Cfa) with warm, wet summers and cool, moist winters. Although there is four times as much rainfall in March as there is in September, Coolangatta is still considered to have no dry season because there is more than a tenth of the rainfall of the wettest month in the driest month of the year.

Lighthouse at Point Danger, Coolangatta, Queensland — a memorial to Lieutenant James Cook of HM Bark Endeavour who named the Point and described the area during the voyage of 1770.

Each June, Coolangatta hosts the Cooly Rocks On Festival, a two-week 1950s and 1960s nostalgia festival with free entertainment and attractions, including hot rods, restored cars and revival bands playing music of the era.

Coolangatta is featured in the song It's Hot in Brisbane but it's Coolangatta, recorded in 1953 by Gwen Ryan, Claude Carnell's Orchestra and additional vocals from Doug Roughton's Hokey Pokey Club. Funded by 39 businesses, it is believed to be the first jingle written to promote an Australian tourist destination. In 2008 the song was used as the theme for a Gold Coast Heritage exhibition about the 1950s, 1960s and 1970s on the Gold Coast, featuring oral histories and objects of Gold Coast residents.

Coolangatta was also used as the fictitious town of Porpoise Spit in the 1994 film Muriel's Wedding.

All content from Kiddle encyclopedia articles (including the article images and facts) can be freely used under Attribution-ShareAlike license, unless stated otherwise. Cite this article:
Coolangatta Facts for Kids. Kiddle Encyclopedia.