Kirra is a beachside suburb of the Gold Coast in Queensland, Australia. The small rocky headland Kirra Point separates Kirra beach to the north and Coolangatta beach to the south, and is noted as one of the world's premier surf breaks.

In the past the surf break was known for producing high quality barrels. Today sand pumping across the Tweed River mouth has filled it in and changed its character.

In May 1972 the Government of Queensland built a groyne, now called "big groyne", extending Kirra Point, to trap sand on Coolangatta beach to the south. The growing tourist industry there relied on sandy beaches and the Coolangatta stretch had been plagued by erosion problems. Surfers were against the plan, believing it would kill the break, and they held protest meetings. They were right about its effect on the surf, for the following year a deep hole formed off the groyne. But after that first year the sand returned and it broke as well as ever. 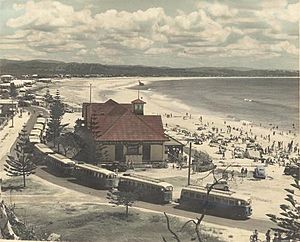 A second smaller barrier, called "little groyne" was later built a short distance north on Kirra beach. Since then, the big groyne has been partially removed and both groynes have been almost completely covered by sand from the sand pumping.

There have been environmental effects of the sand pumping on the reef. A popular diving area with sea-life including manta rays and wobbegongs has been buried over since the pumping started. Dive companies have relocated or turned their focus to other smaller reef areas. The sand pumping contract held on the area is in place until 2024, when the contract will be re-evaluated.

All content from Kiddle encyclopedia articles (including the article images and facts) can be freely used under Attribution-ShareAlike license, unless stated otherwise. Cite this article:
Kirra, Queensland Facts for Kids. Kiddle Encyclopedia.