Kids Encyclopedia Facts
This page is about the Australian suburb of Southport. For other uses, see Southport (disambiguation).

Southport is a suburb and the central business district near the midpoint of Gold Coast, Queensland, Australia and has one of the city's largest communities. At the 2011 Census, Southport had a population of 28,315.

Originally known as Nerang Creek Heads, it was named Southport because it was the southernmost port of the colony of Queensland. Southport is recognised as the central business district of the City of Gold Coast. It has the city's largest area of office space at 103,818 m2. In the past, Southport was the central entertainment location of the Gold Coast. In current times it is set apart from the normal tourist hub of the Gold Coast. However, it has still experienced tourist-driven development and extraordinary growth. Southport has 18 high-rise towers either completed, under construction or awaiting commencement.

The median/average age of the Southport population is 36 years of age, 1 year below the Australian average. 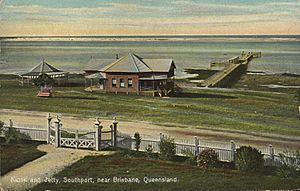 Kiosk and jetty at Southport in the early 1900s. 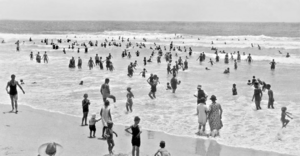 A settlement was first surveyed in 1874 and the name Southport decided the following year. Southport was once the site of timber mills. A port was established to ship logs to Brisbane. Cutting timber opened up the area for settlement. Early rural industries included sugar growing and livestock grazing.

In 1883, the first Southport Pier was built to allow steamships to bring cargo and passengers to Southport. In the 1880s, the Southport became the chosen site for the holiday residence of the Queensland Governor Sir Anthony Musgrave and his wife Lady Musgrave. Known as the Summer Place and still situated on the present day site of The Southport School, the choice of Southport as the preferred holiday destination for one of the most prominent couples in Queensland established the township as Queensland's preeminent seaside resort. Following the death of the governor in 1888, the Summer Place continued to be a holiday home for visitors to the area.

In 1889 the South Coast railway from Beenleigh to Southport opened. The line was closed in 1964. After the arrival of the rail and prior to the construction of vehicular or pedestrian bridges across the Nerang River, a ferry service run by Johan Meyer ferried passengers to Main Beach, Queensland and a horse and buggy service linked the area to Surfers Paradise.

By 1901 Federation Southport was well established as a tourist seaside spot with numerous accommodation options and a permanent population of 1230. Tourism continued to expand in the first half of the 20th century with Southport maintaining its role as a seaside resort and a popular destination for day trippers and excursionists travelling from Brisbane. The construction of the Jubilee Bridge in 1925 between Southport and Main Beach replaced the ferry service and facilitated further growth. 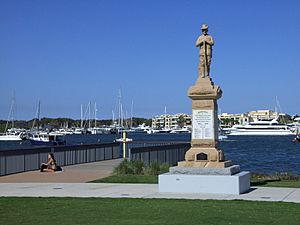 On 25 April 1922 (ANZAC Day) Southport War Memorial located at the foot of Nerang Street was dedicated by the Member of the Queensland Legislative Assembly for Albert, John Appel, in a presence of many Southport people. In 2010, renovation of the parklands required the relocation of the memorial; it was re-dedicated on 11 November 2010.

A cement jetty was built in 1914 to replace the earlier structure. In 1927, the Pier Theatre which included a cafe and indoor golf course was built on the jetty. A fire destroyed the structure in 1932 but it was rebuilt and open to the public for nearly forty years.

By the 1950s, Southport was the central entertainment location of the Gold Coast. It was also the administrative centre, with a central business district.

In 2013 the business area of Southport was declared a priority development area, officially creating the Gold Coast central business district. 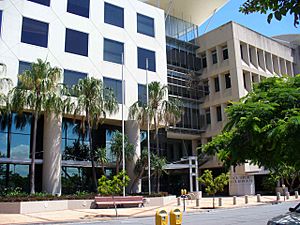 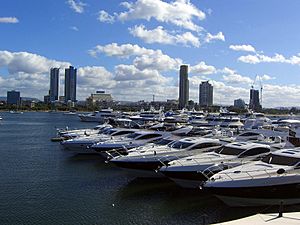 The body of water marking the eastern boundary of present day Southport is known as the Gold Coast Broadwater. The Broadwater houses the Southport Yacht Club and a number of marinas on the southern bank of the Nerang River in an area now known as Main Beach. The area is used for fishing, boating, and watersports. Located opposite Southport on the far side of the Broadwater on The Spit, is the theme park Sea World. Although the Broadwater water is suitable for swimming, it is only six minutes from Surfers Paradise, which features high quality beaches and infrastructure including a permanent life guard station. The present day southern boundary of Southport is the Nerang River.

Australia Fair Shopping Centre is an indoor shopping centre spreading over Scarborough Street with frontages on Nerang Street and the Gold Coast Highway. Containing 233 stores and a cinema, it was established in 1983, initially on the site of the former milk factory and entirely on the site of the former Pacific Hotel Southport which was built in 1878, redesigned in 1927 and demolished in 1988 to make way for the expansion of the shopping complex.

The western end of Nerang Street in the vicinity of the intersection of Scarborough Street is also known as the Southport Mall. The re-opening of the mall (the old CBD, located adjacent to the shopping centre) to low-speed through traffic, after eight years of closure to vehicles, took place in 2000.

At the top of the mall, on the south western intersection of Scarborough and Nerang Streets, is the Art Deco styled Hotel Cecil (Southport) which is considered an 'important anchor' in the streetscape. Opposite the hotel is a G:link station and, a few metres to the north, is the major northern bus interchange for the Gold Coast.

The City of Gold Coast Southport Branch Library is located on the Corner of Garden and Lawson Streets. It was previously located on the top floor of the Australia Fair Shopping Centre. The Southport Branch Library was completed in 2002 and is one of 14 branches of the city's library. Upstairs, in the same building, is the Local Studies Library which includes the city's historical collection of materials including documents, photographs, films, advertising and memorabilia.

St Hilda's School, which was founded in 1911, is located opposite the hospital and is the only all-girls school on the Gold Coast. Southport is home to The Southport School, which was once the largest boarding school in Queensland. The school was founded in 1901 and has a well-known clock tower and chapel. It is also one of the few schools in Australia where cadet service is mandatory.

In April 2009, the three-tower Southport Central development was opened.

in 2014, the Gold Coast City Council, in an effort to revitalise and solidify the Southport as the Central Business District for the Gold Coast, opened its own Chinatown.

The Sundale Shopping Centre, which opened on 26 March 1969, was the first of its kind on the Gold Coast costing a record $7.5 million but closed in 1989 after the larger Australia Fair Shopping Centre opened nearby. It was located on 5 hectares (12 acres) of prime real estate facing the Broadwater which was previously the site of the popular Southport Hotel which was originally constructed in 1876.

As well as providing panoramic views of the Nerang River from the upper floor, it was home to Queensland's first Big W department store as well as a cinema, restaurants, 45 speciality stores and a 7,000-vehicle car park. It was proposed as a location for the building of the Gold Coast Convention Centre. Such a development would have rejuvenated the old administrative centre of the Gold Coast. However, it lost its bid to Broadbeach, in part because of a lack of tourist accommodation in Southport.

The site hosted weekly markets throughout the 1990s for several years after its closure, until its eventual demolition in 2003, at which time a time capsule was buried where the popular mall once stood.[where?] The area is now home to the Meriton Brighton on Broadwater development, a mix of high and low-rise buildings together with trendy eateries and some retail outlets. In more recent years another a time capsule was discovered on the Sundale site which was buried when the mall was originally constructed. It was originally meant to be opened in the 2000s and was filled with notes and items which were meant to predict what the 21st century would be like. It is now located in the Gold Coast City Council Local Studies Library.

Chinatown Gold Coast The $6.8 million Chinatown precinct is being developed in partnership with the community, private sector and government.

The Gold Coast Aquatic Centre is located on Marine Parade adjacent to Southport Broadwater. It has a 50-metre Olympic pool with diving towers, 33- and 25-metre pools and a 15-metre indoor teaching pool. These pools are heated. There is a children's aquatic playground which includes a wading pool.

There is a major park located along the shore of the Southport Broadwater. The state government has allocated A$16M with matched funding from Gold Coast City Council (over $32 million in total), to invest into the parklands. The works will include building a pier along the Southport Mall alignment. The park will be known as Broadwater Park.

Southport has a number of heritage-listed sites, including:

Habitats for native mammals include large trees with or without hollows, fallen logs, leaf litter and understorey vegetation. These provide food, shelter and places for breeding. Southport is a place for picnics, riverside walks and birdwatching in the Broadwater Parklands.

The 1954 Australian Grand Prix was held at Southport on 7 November, using a circuit made up of public roads. The circuit was 5.7 miles in length, and there were two "no-passing" sections, where the road surface was too narrow for overtaking and too expensive to widen. The Grand Prix was won by Lex Davison in a HWM-Jaguar, ahead of Curly Brydon in an MG TC and Ken Richardson in a Ford V8 Special. Only two more meetings were held at the track - the Queensland Racing Car Championship in October 1955, and a motorcycle meeting in the same year. 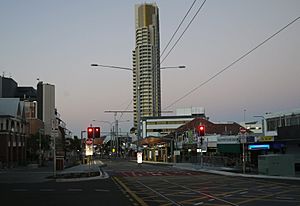 Southport G:link Station located in the heart of the CBD 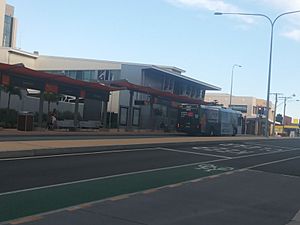 The Southport bus station, located next to the Southport G:link station, together acting as the main transportation hub for the CBD.

Southport is also well serviced by public transport. A light rail system called G:link opened in July 2014 and runs from Broadbeach to Gold Coast University Hospital. There are seven light rail stations in the suburb, connecting Southport with the major hubs of Surfers Paradise and Broadbeach. There are two major bus stations - Southport and GCUH. The Southport bus station is located in the heart of the suburb on Scarborough Street which provides regular and high frequency services to mainly the northern suburbs. GCUH bus station is situated on the western part of Southport, servicing Gold Coast University Hospital and the northern part of the Griffith University, Gold Coast campus. All services are a part of the Translink integrated fare system.

An extension to the light rail system was announced in October 2015.. It would operate from the current terminus at Gold Coast University Hospital to Helensvale railway station. The extension is expected to open before the 2018 Commonwealth Games. Helensvale is the suburb's nearest railway station, located 11 km from the Southport CBD. The railway line provides a connection to Brisbane city and Brisbane Airport.

All content from Kiddle encyclopedia articles (including the article images and facts) can be freely used under Attribution-ShareAlike license, unless stated otherwise. Cite this article:
Southport, Queensland Facts for Kids. Kiddle Encyclopedia.