Labrador is a coastal suburb in the City of Gold Coast, Queensland, Australia. In the 2016 census, Labrador had a population of 18,261 people.

In April 1878 sugar farmerand investor Robert Muir and investor John Lennon bought 139 acres (0.56 km2) of portion 62 of Crown Land, originally known as Southport North. Portion 62 fronted the Broadwater from Biggera Creek to Broad Street, and the future Billington Street formed part of the western boundary, which continued north until it reached Biggera Creek. The land was surveyed and divided into 19 selections not long after its purchase. When the allotments were sold they were advertised as part of ‘Mr Muir’s Central Southport Estate’. The land overlooked the expanse of the Broadwater and was a good spot for fishing.

The Labrador Hotel was built circa 1881 by Fredrick Shaw on land originally part of Robert Muirs' selection. The hotel had fifteen bedrooms and three sitting rooms, out houses and stables sufficient for regular use by Queensland coach service Cobb and Co. Passengers arriving by boat from Brisbane were also taken to the hotel by the Cobb and Co. In 1844 the hotel lease was taken by John Langdon who secured a Country Publican's licence with liquor licence. The hotels business declined when another Hotel opened at the northern tip of Labrador, Deepwater point, in 1886. Mr Langdon sold the Labrador Hotel to a Maria Matilda Crooke at auction in April 1888. The hotel was completely destroyed by fire later in 1888. 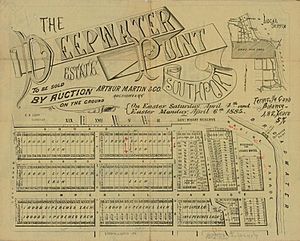 The area was often portrayed as a mosquito swamp land due to its geography and numerous creeks and steams. This did not prevent the investment and building of the Grand Hotel in 1886 at Deepwater point, overlooking the ocean. It had become a local landmark by 1922, having tennis courts and a ballroom. Extensions during the 1950s included a beer garden and an entertainment room to host International cabarets popular at the time. In 1975 the timber building was completely destroyed by fire. The site saw transformation with a much smaller brick building named The Grand Tavern which was later demolished in 1987 to make way for adjacent land acquisition and development plans. A new hotel was built in a Queenslander style with an apartment block above it. The Grand opened in 2001. Remaining land was sold and apartments were built. 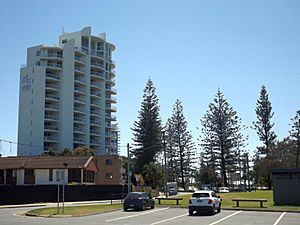 Hilltop House was originally a community meeting place before a community hall was planned and partley funded by social events and dances at the centre. It was owned by the Freeman family who named it in the 1930s after moving moved it from the Broad Street area to higher ground and converted to a house. The street was later named Hilltop. The Freeman family had been owners of Labrador House on Marine Parade between 1924 and 1938. 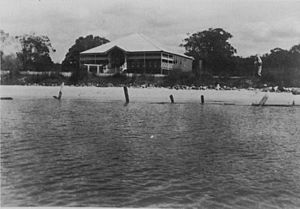 Labrador House Built in 1883 facing Marine parade, this was a holiday home with views to the broadwater and South Stradbroke Island. It was one of the first large homes, built by Francis Augusta Lousia Thorn. It sat on 2 acres (0.0081 km2) of land. In 1923 Jim (James) Cavill owned the home and thought to re develop it. Instead he took his development ideas to Elston, now Surfers Paradise. In 1937 the land was subdivided into thirteen blocks. The following year the house was converted into three flats. In 1945 the Hasemann family became owners of the house and eleven years later built a convieniance store on one side. In 1957 the house was stillIn the Hasemann family when daughter Dawn married realtor Norman Rix who went on to become a Gold Coast Alderman.Labrador State SchoolIn 1970 the house was demolished for redevelopment of the site. It was in during 1990's that Dawn Rix began researching the history of her home and local community, resulting in her book Labrador - The early pioneers. 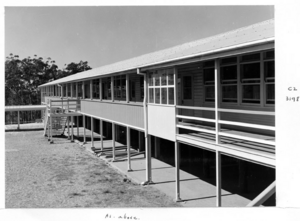 Labrador has had one State School although it changed locations in 1952. The first School was built on four acres of swampy land donated by the state on the corner of Billington Street and Brisbane Road. A local committee arranged for the land to be cleared and made suitable for the 17 original students. The school was officially opened on 24 January 1921. Within two months, 26 students were officially enrolled.

Miss May Macpherson was the first and sole Teacher, responsible for teaching all grades required. By 1933 there were 44 students enrolled. Concern over the swampy land that often flooded and increasing traffic on Brisbane Road led to lobbying government for larger premises. A new site at Imperial Parade was acquired in 1948. The old school house building was moved to the Southport State School grounds. Turpin Road and Gordon Street bound the new site at Imperial Parade, where the school is still located. This school was officially opened on 2 August 1952. There were four classrooms and 193 pupils.

According to the 2016 census of Population, there were 18,261 people in Labrador.

All content from Kiddle encyclopedia articles (including the article images and facts) can be freely used under Attribution-ShareAlike license, unless stated otherwise. Cite this article:
Labrador, Queensland Facts for Kids. Kiddle Encyclopedia.