Division of Fadden facts for kids 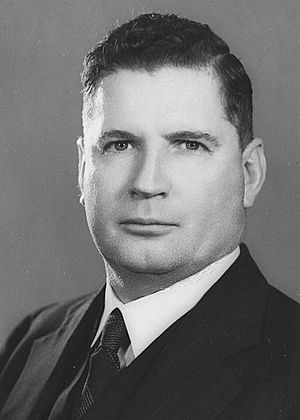 The Division of Fadden is an Australian Electoral Division in Queensland. It was set up in 1977 and is named after Sir Arthur Fadden, Prime Minister of Australia in 1941. At first it included a large area south of Brisbane, but today it covers the northern Gold Coast area, including Alberton, Arundel, Biggera Waters, Coombabah, Coomera, Gaven, Gilberton, Helensvale, Hollywell, Hope Island, Jacobs Well, Labrador, Molendinar, Norwell, Paradise Point, Parkwood, Runaway Bay, Stapylton, Steiglitz, Woongoolba and parts of Ormeau, Oxenford, Pacific Pines, Pimpama and Southport. South Stradbroke Island and other islands in the Broadwater and South Moreton Bay.

David Cameron lost his seat in the 1983 election, but was elected to the Division of Moreton in a by-election. David Beddall did not stand for Fadden in 1984, but changed to the Division of Rankin. David Jull was Minister for Administrative Services at the start of the Howard Government.

All content from Kiddle encyclopedia articles (including the article images and facts) can be freely used under Attribution-ShareAlike license, unless stated otherwise. Cite this article:
Division of Fadden Facts for Kids. Kiddle Encyclopedia.