Alberton is a locality in the City of Gold Coast in Queensland, Australia. According to the 2011 census it had a population of 576. It is bounded in the north by the Logan River and in the west by its tributary, the Albert River.

The Aboriginal name for the area was Wobbomerijee (where Wobum means mud and Mudtheri means sticky). 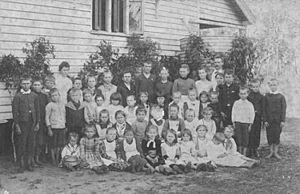 Alberton State School and students, circa 1892

European settlement began in 1863 when the first settlers arrived, mostly German immigrants. A town reserve was established in 1865 on the souther bank near the junction of the Logan and Albert Rivers.

In 1869, the first Lutheran church was established near the Lutheran cemetery on Zipfs Road. The area was known as Elkana (meaning "God has created and blessed"). Later the area was called Alberton after Prince Albert, consort to Queen Victoria, but the name Elkana is preserved in Elkana Road. 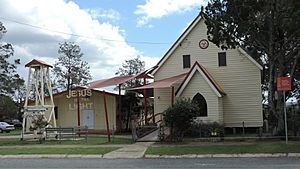 In 1870, a ferry service across the river was introduced with the first bridge being built in 1876 at Yatala. A German school was established early in the 1870s beside the church. The Alberton Provisional School opened on 13 May 1876 with children attending German school on only one day a week. On 13 October 1884 the provisional school became the Alberton State School. In 1886, a new larger Lutheran church (the present St Peter's at 187 Alberton Road) was built. It was consecrated in 1887 by Rev Hellmuth. 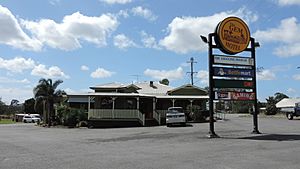 The Gem Hotel was established prior to 1911, but it was destroyed by fire on 27 June 1933 but fortunately was insured. By December 1933, the hotel had been rebuilt and was still operating in April 2014 on the corner of Stapylton-Jacobs Well Road and Rotary Park Road.

The German school was demolished in 1919. The Alberton State School closed in 1966.

In the 1950s, a very notable Bora ceremonial site on the Logan river was destroyed, and replaced with a pineapple plantation owned by a Mr. Inklemann. The site bore the characteristics of the classic twin circles, with a north-south orientation, the large northern ring measuring 70-80 feet in diameter, while the smaller ring lay some 100 feet to its south. In the middle of the latter was a native stone hut, consisting of several stone slabs supporting a stone roof, not unlike the dolmen structures of prehistoric Europe.

All content from Kiddle encyclopedia articles (including the article images and facts) can be freely used under Attribution-ShareAlike license, unless stated otherwise. Cite this article:
Alberton, Queensland Facts for Kids. Kiddle Encyclopedia.